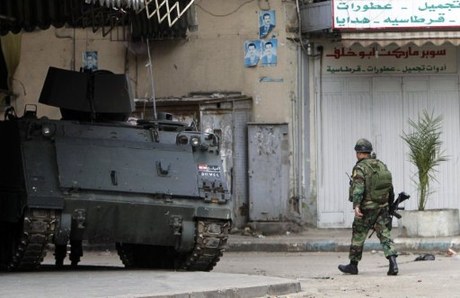 Several countries are currently boosting their arms aid and delivery to the Lebanese army to fortify its capabilities to confront jihadists, who are entrenched on the outskirts of the northeastern border town of Arsal on the porous Syrian-Lebanese border.

A high-ranking military source denied in comments published in al-Joumhouria newspaper on Thursday that Army General Jean Qahwaji discussed with U.S. officials during a recent visit to Washington an Iranian grant to the military.

“The military command is not concerned with such a matter. The cabinet should first agree on the grant,” the source told the daily.

Iran had recently offered to support the Lebanese army, following suit two of its rivals Saudi Arabia and the United States.

The source described Qahwaji's visit to the United States as “successful,” pointing out that the U.S. military aid exceeded 1 billion dollars in the last period and increased after the Arsal battles.

“Discussions focused on arming the Lebanese military according to the challenges of the current period as Qahwaji stressed the army's readiness to battle terrorism.”

The sources stressed that Lebanon's participation in a U.S.-led coalition to degrade and destroy the Islamic State of Iraq and the Levant (ISIL) is a political decision that should be agreed upon by the cabinet.

Last week, Qahwaji attended a meeting for military leaders from more than 20 partner nations in the coalition against ISIL.

Saudi Arabia last year announced it would give the Lebanese army $3 billion to purchase weapons and equipment from France, but that deal has yet to be fully implemented.

In August, the kingdom offered another $1 billion in funds to allow the army to purchase supplies immediately.

Washington has also sought to bolster Lebanon's military, and recently announced it had delivered a new shipment of Hellfire missiles and would also supply light aircraft.

On Tuesday, Britian's Chief of the Defense Staff General Sir Nicholas Houghton discussed during a short visit to Lebanon means to boost aid to the Lebanese army,

He tackled with Qahwaji a project to erect monitoring posts to control the Lebanese-Syrian border.

Iranian foreign ministry's spokeswoman Marziya Afkham announced on Wednesday that it's waiting for a response form Lebanese authorities regarding its military grant.

Defense Minister Samir Moqbel during his visit to Tehran earlier this week discussed the Iranian aid amid differences between Lebanese officials on whether to accept the grant or not.

Iran, a major weapons manufacturer in the region, has in the past said it exported military products to scores of countries, although it has never revealed details.

Russia made in the past many promises to Lebanon to supply its army all types of equipment from fighter jets to helicopters but according to media reports it never delivered on its promises.

The only savior for Lebanon is the Army. It is capable, it is unifying and is the only real option forward for all and every single Lebanese. Let the friends of Lebanon start delivering and stop talking.

bro, yes you should not stop talking until the start delivering bro.

texas. You dont get it.

HA does not want a strong army. They will not allow ur ideas above. They want an army that is barely above water. If the army is very strong, they become obsolete.

1- There is a third way other than Bachar or Qaeda in Syria.

2- Assad's christians are the ones who used to bomb Achrafieh and Jounieh and Zahleh during lebanon's war 75-90. So they are not my first priority anymore. My priority is Lebanon. And Lebanon's nbr 1 ennemy is Assad.