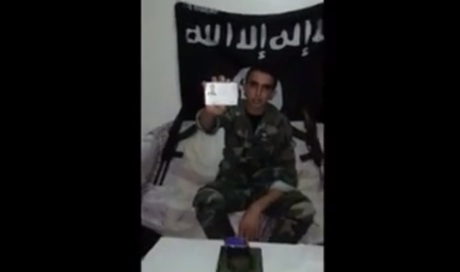 The analysis of the YouTube video of defected soldier Abdul Qader Akkoumi, who has been reportedly ambushed along with the terror network in the town of Asoun in the northern area of Dinniyeh, was the main thread in unveiling the location of the busted cell.

According to As Safir newspaper published on Friday, the YouTube video of Akkoumi's defection from the army, in which he announced joining the ranks of the Islamic State jihadist group, was shot by a cellular phone on the outskirts of Dinniyeh.

Intensified investigations to unveil the owner of the phone and his location later led to the town of Asoun.

The probe showed that a group of seven people were taking an apartment near Asoun Public Hospital as their refuge.

The fate of Akkoumi remains unknown. As Safir newspaper reported that Akkoumi's corpse was found burnt in the apartment, while the pan-Arab daily al-Hayat said that he fled the scene along with Syrian nationals after the army raided the location.

As Safir pointed out that Akkoumi's personal belongings, his military uniform and his identification tag were found at the apartment.

The newspaper said that Akkoumi's mother headed Thursday night to the military police station in Tripoli's al-Qobbeh to carry out DNA tests and match them with the remains that could belong to her son.

Akkoumi defected the army on October 11.

The report revealed that the remaining YouTube videos of soldiers defecting the military institutions where filmed in the Asoun apartment.

The terror network later helped the defected soldiers to join the jihadists who are entrenched on the outskirts of the northeastern border town of Arsal on the porous Syrian-Lebanese border.

The busted cell reportedly plotted attacks similar to those carried out by the Dinniyeh Group in 2000.

In January 2000 the Dinniyeh Group, which was led by Bassam Ahmed Kanj, launched a failed attempt to create an Islamist mini-state in northern Lebanon, seizing control of dozens of villages in the mountainous Dinniyeh district.

The army raided at dawn on Thursday the Asoun apartment, killing three terrorists and apprehending 51-year-old Ahmed Salim Miqati, who is also known as Abou al-Huda and Abi Bakr.

Miqati recently pledged allegiance to the Islamic State of Iraq and the Levant (ISIL) and established cells linked to the group in the region.

He was planning to carry out a huge terrorist act along with his son Omar, who is fighting alongside ISIL in Arsal, according to a military communique.

As Safir newspaper reported that Miqati revealed during interrogation that he has been contacting a northern lawmaker and coordinating with him the defection of soldiers.

A military source told the daily that the army command will demand the parliament to lift immunity off the MP, whose identity wasn't revealed in the report.

Miqati is also the relative of Bilal Omar Miqati who is accused of beheading Lebanese soldiers on the outskirts of Arsal.

So far, five Lebanese soldiers have announced their defection since August, deserting the military in videos released by jihadist groups.

Take these terrorists down with the traitors

They will end up in Hell and burn for Eternity.

God bless the Lebanese Army! Find these jihadist terrorist traitors, and terminate them.

I have to agree with you also on this one bro!

-phoenix1 now will write, "why was my comment deleted naharnet?"