Makari Says No Presidential Elections in Near Future 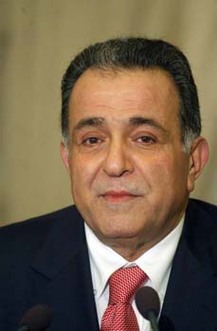 Deputy Speaker Farid Makari expressed doubt on Saturday that the presidential elections would be held in 2014, expecting that lawmakers will link the extension of the parliamentary tenure with the vacuum at the Baabda Palace.

“Extending the term of the parliament is a temporary solution until a new head of state is elected,” Makari said in an interview with An Nahar newspaper.

He pointed out that the Christian parties still didn't make a clear statement regarding its stance from the matter, expressing belief that they will agree on extending the term of the parliament.

The failure to hold the presidential elections has been exacerbated by the inability to organize legislative polls.

Parliament will most likely extend its term for the second time under the pretext that the security conditions don't allow the elections to be held without security incidents.

Makari accused Hizbullah and the Free Patriotic Movement of impeding the presidential elections by boycotting sessions set to elect a new head of state.

FPM chief Michel “Aoun is the one to blame because the vacuum at the Baabda Palace affects Christians at the first place.”

He pointed out that head of al-Mustaqbal movement MP Saad Hariri and his parliamentary bloc has no veto against any presidential candidate, including Aoun.

The parliament's term extension session is likely to take place early next month to discuss a draft-law proposed by Zahle MP Nicolas Fattoush that calls for an extension of two years and seven months.

Fattoush's proposal in addition to another draft-law suggested by the LF - to amend the legal deadline to run in the elections and form a committee to supervise the polls - are expected to top the agenda of the session.

Asked if Hariri will return to Lebanon soon to attend the session set to extend the parliament's tenure, Makari said that Hariri's presence is important to “highlight the importance of this matter at this stage.”

He considered the matter “legal.”

Parliament extended its term last year over security fears and a disagreement among rival MPs on an electoral law.

The MP warned in a vicious attack against the army recently of “a Sunni revolution,” calling for mutiny among Sunni soldiers by calling them “to return to their homes and their barracks.”

The caporal who pretends defending the christians is the one who is destroying them.

Wait till you see how HA is going to destroy all institutions.

Are you saying if the Shia in the suburbs of Beirut have never paid electricity under the name of resistance should have had their power cut after. 1 month of violation?