Baghdadi's Fate Unclear as Airstrikes Hit IS Leaders near Mosul 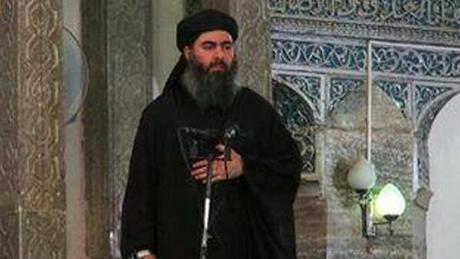 The strikes, which destroyed a vehicle convoy of 10 IS armed trucks late Friday, targeted a "gathering of ISIL leaders" near Mosul, U.S. Central Command said.

"We cannot confirm if ISIL leader Abu Bakr al-Baghdadi was among those present," CENTCOM said in a statement, using another acronym by which the group is known.

"This strike demonstrates the pressure we continue to place on the ISIL terrorist network and the group's increasingly limited freedom to maneuver, communicate and command."

The strikes came as President Barack Obama unveiled plans to send 1,500 additional troops to Iraq to help Baghdad government forces strike back at the extremist fighters, roughly doubling the number of U.S. soldiers in the country.

To fund the growing war effort, Obama plans to request $5.6 billion from Congress, including $1.6 billion to train and arm the Iraqi forces, officials said.

The move marked a deepening U.S. commitment in the open-ended war against the IS group, three months since American aircraft launched air strikes against the Sunni extremists.

It also extends the U.S. training and advising mission to new areas as Iraqi and Kurdish forces prime themselves to recapture ground lost to the IS group, including in the volatile Anbar province in the west where the Iraqi army has been on the retreat.

Obama had resisted keeping troops in Iraq earlier in his term, vowing to end the American presence that began with the 2003 invasion and continued as an occupation through 2011.

IS militants briefly held Mosul dam in August but Kurdish forces and Iraqi army troops -- backed up by U.S. air strikes -- succeeded in retaking the structure later that month.

The large dam in northern Iraq is a crucial piece of infrastructure and IS has repeatedly tried to seize it back.

The dam is the country's largest and if destroyed or dismantled, it could unleash major flooding of the city of Mosul and the capital Baghdad.

First, those who helped create this animal should be fed to him. Later, creativity is endless...

Just a little FYI: Obama had NOT simply resisted keeping troops in Iraq, but Maliki had refused to sign a new agreement allowing US troops to remain.

To hell ya rab.

I respect al baghdadi and nassrallah