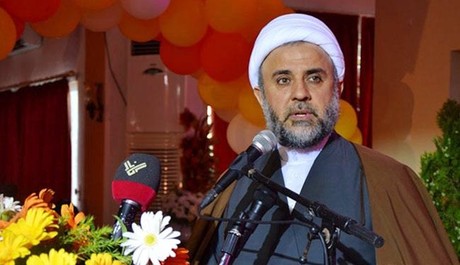 Deputy head of Hizbullah's Executive Council Sheikh Nabil Qaouq said on Sunday that Hizbullah's intervention in Syria is “a 100% Lebanese decision” and this decision “has enhanced the strength of Lebanon in countering extremist groups.”

"Hizbullah's intervention in Syria serves the Lebanese citizens in addition to the citizens of the region and the entire nation, because the risk of takfiris is a risk against the entire nation,” said Qaouq during a ceremony held by Hizbullah in al-Kheyam, south of Lebanon.

"Takfiris terrorism is an absolute evil, it has no good for any sect or doctrine, or any category. It is a threat to the Sunnis, Shiites, Druze and Christians, " he added.

Qaouq also pointed out that, “the goal of the takfiri groups, was to ignite sedition through their attacks in different areas in Lebanon.”

"Lebanon is stronger than sedition, the Islamic State, al-Nusra Front or any takfiri group,” he added.

Qaouq said: “Hizbullah's intervention in Syria has a 100% Lebanese benefit and it came from a 100% Lebanese decision and it has enhanced the strength of Lebanon in countering extremist groups.”

Hizbullah was involved in the fighting side by side with the Syrian regime and a number of its fighters were killed.

Lebanon has been facing violent clashes since August in Arsal as extremist groups stormed the town and clashed with army troops and withdrew to the outskirts of Arsal, kidnapping a number of army soldiers and policemen, some of whom are still abducted.

After Arsal, Tripoli and several areas in the north faced violent clashes between the army and armed groups that consider that Hizbullah's fights in Syria are against “the Sunni people.”

I know at least 100 people who are against your intervention in Syria! So your theory of 100% support just got discredited

@Mowaten: Technically, 2/3 is still 66.6%, not 100.
Another note: Admittedly, a lot of people became more favourable of Hizb's intervention in Syria after the Jihadists attacked Lebanon in Arsal and Akkar. But before that, even Hizb supporters who are not sheer brainwashed zombies were against Hizb's role.
And finally, Hizb was the best friend of Nusra when it came to recruitment: Hundreds of former FSA troopers defected to Nusra and ISIL et al when Hizb publicly announced their involvement.
And today, Hizb is simply dependent on the existence of the likes of ISIL and Nusra to justify their continued crimes - neither of which terrorist groups existed before Hizb got involved.

i didnt answer his 100% support claim, because it's plain BS and didnt think anyone would take him seriously on that. but since it seems some are slower than others: nobody ever said HA had 100% support.

-"Hizb supporters who are not sheer brainwashed zombies were against Hizb's role"
yea? where did you find those? in deir el salib as well? please share your sources

"And finally, Hizb was the best friend of Nusra when it came to recruitment: Hundreds of former FSA troopers defected to Nusra and ISIL et al when Hizb publicly announced their involvement. "

FSA/nusra: same/same, different names. the FSA is the "politically correct" face for foreign powers to send in weapons, before they resurface in IS/nusra hands a few weeks later.

"And today, Hizb is simply dependent on the existence of the likes of ISIL and Nusra to justify their continued crimes"
oh is that the new anti-HA song? sounds a lot like last year's ("HA is dependent on israel to justify its weapons")
seems like HA is always dependent on so many things, must be a full time job to create israel + nusra + isis only to fight them and justify being...

"neither of which terrorist groups existed before Hizb got involved."

hahhaha yea. dude, you know nusra and isis are creations of ISI and qaeda right? oh, actually no you dont

They need to keep telling themselves this so they don't weep at the colossal mess they're gotten us and themselves into.

Just leave it for the army next time. Ok?

Ah good old Qaouk, speaks to his mirror yet sees the mirror nodding its approval. It's a pity though, to see what was once a seemingly noble and powerful resistance become so spiteful, it's top cadres can say what takes their fancy, but facts are facts, and nothing they'll say can convince anymore: No one who gets into such a fratricidal war like the one in Syria can claim to come out stronger, facts is, the opposite is more like the truth. I'll repeat it, it's a real pity, for if we had pooled our resources as Lebanese, as one people following one aim and one goal instead of such myopic sectarian policies, who would dare shake us?

If not for the intervention, then Lebanon would've been overrun with IS, Nusra and all the other takfiri factions today.

I have no idea why M8 and their supporters have to defend their actions in Syria over and over again with their absolute disinformation garbage. The whole world knows unequivocally there were no ISIS or Nusra in Syria prior to HA intervention. If your actions were so righteous and honorable you wouldn't have to defend them with absolute and constant lies right? Or do you simply believe if you repeat your own lies enough times you will start believing it's the truth and absolve yourselves from guilt?