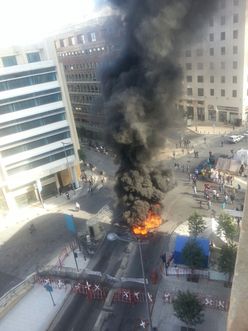 The relatives of abducted soldiers and policemen briefly blocked on Monday several roads in the capital Beirut to demand the judiciary to lift sanctions against several Islamist inmates after jihadists threatened to start killing the captives.

The families blocked Beirut's Saifi road and near the port by setting tires on fire.

The relatives had vowed earlier to escalate their measures, setting tires on fire near their protest site in Beirut's Riad al-Solh square.

They later however reopened the roads after holding talks with Health Minister Wael Abou Faour who visited their rally at Saifi.

The relatives' vows came after jihadists threatened to start killing the captives if the state failed to suspend sentences issued on Friday against Islamist Roumieh prison inmates.

OTV reported that the kidnappers later extended the ultimatum until 4:00 pm.

The brother of Ibrahim Mougheit told media outlets on Monday that the Islamic State of Iraq and the Levant (ISIL), one of the jihadists groups that took the servicemen captive, threatened to start killing soldiers within two hours if sentences against inmates were not suspended.

“We will escalate our endeavors,” several members of the families warned.

They expressed surprise over the sentences that were issued on Friday by the Judicial Council against Nahr al-Bared prisoners, the latest in the ongoing trials of Lebanese and other Arabs accused of involvement in the months-long 2007 battles at the northern refugee camp.

The families were joined by a delegation from al-Mustaqbal movement that listened to their demands.

Al-Nusra and the Islamic State groups have been holding several troops and policemen hostage since August 2, when they overran the northeastern border town of Arsal and engaged in bloody clashes with the army.

The two groups have since executed three troops and threatened to murder more hostages if Lebanese authorities didn't fulfill their demands.

Nusra said that the three-month hostage crisis would end if 10 inmates held at Lebanese prisons would be freed for each hostage or seven Lebanese inmates and 30 female prisoners held in Syria would be released for each abducted soldier and policeman or if five Lebanese and 50 women inmates would be freed.

your terrorist friend, from Nusra confirmed you that?

Very nice M14, that pretty muchj sums it all up.
Yes unfortunately I have to agree with blabla, when you get captured by these takfiris, death is certain, and torture aswell.

Even though I hold a profound level of sympathy and solidarity with the families of our kidnapped soldiers, their increasingly aggressive ways of demanding their release is done in the wrong direction. It is not an easy task for our authorities to negotiate with terrorists, in as much as we all have at heart the best for our soldiers, demonstrating and burning tires like they're doing now will simply defray the real orientation and efforts to get our soldiers back safely. Just saying.

Mystic, bil laban... You know what.

As would say terrorist