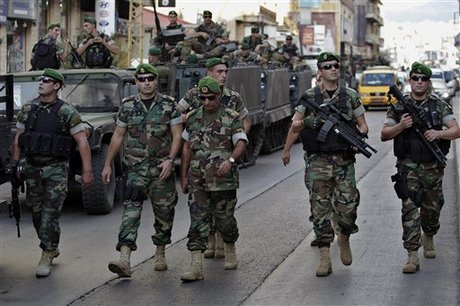 The army intelligence has detained a prominent Syrian figure in the northern Metn area of Bourj Hammoud after the arrest of four terrorist kingpins in the Bekaa town of Chtaura, As Safir newspaper claimed in a report published on Tuesday.

According to the daily, the Syrian is playing an important role in transferring money to the terrorists located in Lebanon, on the outskirts of the northeastern border town of Arsal and in the Syrian Qalamoun.

Sources close to the investigation told the newspaper that the detainee had recently arrived in Lebanon from Syria's al-Riqqa.

He reportedly confessed to investigators that the funding of the terrorist groups is coming from a small country in the Gulf, revealing that the money transfer is transacted through finance companies or banks to unsuspected names.

The report pointed out that the funding groups are sending the money in small sums and in installments so that not to raise suspicion.

The military has been carrying out a major crackdown in several areas across Lebanon, the latest in the Bekaa over the weekend, where it kicked off a major security operation.

Meanwhile, As Safir reported that the four terrorist kingpins, who were detained on Monday in Chtaura, were heading from the outskirts of Arsal to the southern border town of Shebaa.

The newspaper said that the security operation comes days after the arrest of a similar group comprised of three Syrians near Arsal. They were also heading to Shebaa.

I wonder about the identity of that small country in the Gulf.

Please Sebouh80 (Guest), I ask you politely not to use my own private registered guest name. Choose any name you want like Abbas Madras or Jaafar 3antar but why mine??!!

a small country in the gulf involved in terrorism? that's impossible! ;)

_mowaten_ if you have anything factual to say please go ahead, otherwise it is baseless slander

lol you seem very bhurt from the answer i gave you yesterday, parroting it today :)

yes mowaten islamists are being funded by islamists friendly countries and they can quatar, koweit, emirates, and ksa. in the same manner syrian regime and pro regime militias are being funded by Iran. In case you have not realized the fight is about political sunni islam confronting shiite political islam. No one has legitimacy in this stupid conflict that the innocent are paying dearly

no it's about all normal people fighting extremists. the takfiris are a threat to sunnis, shia, alawites, christians, kurds, druze and basically anybody who doesnt share their medieval cavemen ideas.

eagledawn, everybody has the right to have his own opinion...thank God we are in Democracy...at least in appearence (not sure it is really democratical what our parliament did recently in extending its own mandate). However i really do not understand why you defend a country with which we, Lebanese, do not have anything, i mean ANYTHING in common...btw i m thinking of a small country in the gulf, but it may be anyone there in the gulf in doesn't change my conclusion...

Prominent? How long was his beard?

The time has now dawned when we Lebanese should start deporting the Syrians from our country, the longer they stay, the worse the country will get. Then after them, we should start sending the Palestinians out of Lebanon. Lebanon is now simply too overburden with foreigners who are nothing but trouble.