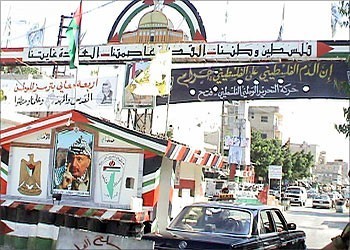 The endeavors come a day after the Lebanese Army Intelligence in south Lebanon, Brig. Gen. Ali Shahrour, urged Palestinian leaders at the camp to hand over fugitives, including Mawlawi, and assume their responsibilities in this regard.

An Nahar newspaper reported earlier on Thursday that Shahrour informed a delegation from the Palestinian Liaison Committee that several wanted suspects linked to terrorist cases are taking the camp as a refuge, demanding Palestinians to hand them over to the army.

Shaker had fled justice more than a year ago following bloody incidents that erupted in June 2013 in Abra, between the army and supporters of Salafist cleric Sheikh Ahmed al-Asir.

Shahrour warned Palestinians' that Mawlawi could carry out endeavors to shake up the security situation at the camp.

The delegation reportedly stressed to the high-ranking military official that the fugitives will be handed over if they was evidence they are residing at the camp.

Media reports said that Mawlawi fled Bab al-Tabbaneh neighborhood in the northern city of Tripoli earlier this month after clashes with the army and took the southern camp as a refuge to prepare for a security operation in cooperation with wanted Sheikh al-Asir, who is also hiding there.

Al-Asir had gone into hiding following deadly clashes between his supporters and the army near Sidon in June last year.

Mawlawi has been charged with belonging to an armed terrorist group in order to stage terrorist acts, and holing up at a Tripoli mosque with the aim of preparing bombs and explosive devices to target Lebanese troops in the area.

Thanks Slash, this is exactly what the army should do, what is inside our soil is ours to take care of. The camps should be leveled and cleaned, then given back to the Lebanese, there's so much we can do with the lands being used by these ungrateful guests. Enough is enough that's all.

Again, disgusting racist comments by Phoenix1. People in the camps already condemned these acts and willing to cooperate, so relax. No need for your racist and ignorant comments. That's not how you solve the problem, when you punish all for the act of one