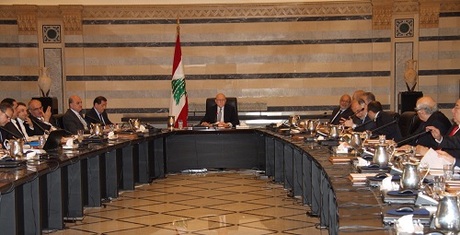 The Qaida-linked al-Nusra Front threatened Thursday to execute one of the captive servicemen if the Lebanese government does not start what it called “serious negotiations.”

“We warn the Lebanese government, which is subordinate to the party of Iran (Hizbullah), that we will kill one of the 'prisoners of war' who are in our custody within 24 hours, if it does not start negotiations in a serious manner,” al-Nusra said in a statement published on the twitter account of its Qalamun branch.

“If the government wants to prove its seriousness in regards to continuing the negotiations, it must release Muslim sister Jumana Hmayyed as a goodwill gesture and must then start implementing the proposal it had chose for the swap process,” the group added.

Hmayyed was arrested near Arsal in February while driving a booby-trapped car that entered Lebanon from Syria's Yabrud region.

“If the government does not comply, we will carry out our threat and will change the proposals we had suggested in our previous statement,” al-Nusra said.

The group has recently said that the 3-month hostage crisis would end if 10 inmates held at Lebanese prisons would be freed for each hostage or seven Lebanese inmates and 30 female prisoners held in Syria would be released for each abducted soldier and policeman or if five Lebanese and 50 women inmates would be freed.

The Lebanese government had previously rejected any swap deal with the jihadists but it has recently accepted one of al-Nusra's options according to media reports.

In its Thursday statement, al-Nusra claimed that “everyone has realized that (Hizbullah) is the only party obstructing the negotiations over the (captive) servicemen, while claiming to be keen on the release of its own captives, the last of whom was Imad Ayyad.”

Al-Nusra was referring to a Hizbullah captive freed on Tuesday in a swap deal with the rebel Free Syrian Army which involved the release of two FSA members.

The Qaida-linked group noted that Ayyad was not released through “honorable negotiations or a heroic operation,” pointing out that Hizbullah “exploited the presence of Muslim sisters in regions it is occupying in Syria in order to arrest them and threaten their families with rape, torture and murder.”

“Their families were the ones holding … Imad (Ayyad) and they are loyal to a FSA group,” Nusra said.

Shortly after Nusra released its statement, the relatives of the Lebanese troops and policemen warned that they will block all of Beirut's entrances at 8:00 am Friday.

Earlier on Thursday, the government refused to compare the release of Hizbullah's detainee Ayyad to the case of the servicemen kidnapped by Nusra and the Islamic State in early August.

The policemen and soldiers were abducted during deadly clashes with the Lebanese army in and around the Bekaa border town of Arsal. A few of them have since been released, three were executed, while the rest are still kidnapped.

“The release of the Hizbullah member cannot be compared to that of the Arsal captives,” Information Minister Ramzi Jreij said after a cabinet session.

The families of the captives have repeatedly accused the government of failing to exert enough efforts to release them.

They voiced their frustration earlier this week when Hizbullah succeeded through negotiations to secure the release of its captive Ayyad.

The cabinet session also tasked a ministerial committee to follow up on food safety in Lebanon, added Jreij after the meeting at the Grand Serail.

The committee will coordinate its efforts with the government, municipalities, and other agencies in order to address the food safety issue and offer its recommendations in the case, he explained.

where is @wolf these days? will you and he be posting using this alias today?

thank you naharnet moderators, this is certainly a tasteful & relevant comment, worthy of being approved.

Here's the reality: Sadly, Iranian blood is more valued than Lebanese blood, this is what's become of Lebanon.

there is no "iranian blood" involved here, you sectarian piece of trash. whether you like it or not hezbollah is lebanese, its members are lebanese, its goals are lebanese and the blood they spilled for this country during the last 3 decades is more lebanese than you will ever be.

Nusra/Daesh are the only ones preventing the deal from happening. By beheading hostages and making unacceptable demands, like freeing hundreds of convicted terrorists from lebanese prisons and others from Syria.

If they accepted the same conditions the FSA did (1 soldier against 2 fighters), the soldiers would have been freed months ago.

How can that be when they don't take orders from Lebanon? and they act above even the Army? That doesn't make sense. Your group is also responsible for bringing this garbage to Lebanon, so enough with the hypocrisy. The day I see HA take orders from LEBANON and not Iran, then I'll be impressed. Till then? Be quiet.

Here's the reality: Sadly, Iranian blood is more valued than Lebanese blood, this is what's become of Lebanon.

The truth is that the terrorists know how ruthless Hezbollah can be, and at the same time they know how different the Lebanese state does things. Hezbollah is a militia, the state is not. But I floated an idea several times, that the state gives the prisoners that the terrorists are asking for to the families of our kidnapped soldiers, one of our boys for 30 of them, leave the families to keep them at secret locations of their choice and if the terrorists want to play ball, then it's fine, but if they mess up, then it's one for 30, simple, Roar, remember, it's the dry shave method ma heyk?

You know all about "dry shaves"..you received it 3 years ago on this forum.

HA is the only reason you can say you have a LAF with any sting in its tail as we speak...if you dislike that fact, then fine...but deal in reality & stop your emotional BS.

Go ask the LAF who ran out of ammo during its battle with Nusra, IS in Arsal, who gave it serious weaponry & covered its flanks with heavy artillery. ... that battle was a superb win for the LAF only because HA is part of the LAF.

Right so in your mind it's perfectly fine today to have a militia outside state control, but during the civil war the Ouwwet were a bunch of outlaws who wouldn't submit to Aoun's command. And the Ouwwet were effectively the LAF for the first half of the war. What selective memory you have Roar...

You claim to be a Christian while accepting this terrorist militia that wants to create an Islamic state.