Hizbullah Has "Fixed Position" Regarding Presidency: Person that Has Real Representation 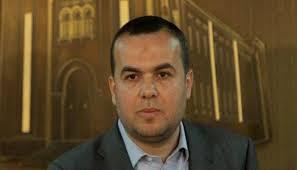 Hizbullah announced on Sunday that "their position is fixed" regarding the issue of the presidential elections, because one can not take "risks" in this case, but rather electing a person that "has a real representation" between Christians.

A member of the Loyalty to Resistance bloc, MP Hassan Fadlallah said during a memorial ceremony in the southern al-Tayri: "Our position is clear concerning this issue, which stems from our vision of the national interest and not just by giving back or fulfill."

Hizbullah leader Sayyed Hassan Nasrallah had announced few months ago his official support for the Free Patriotic Movement leader MP Michel Aoun as a candidate for the presidency. The door of negotiations with al-Mostaqbal bloc have not been closed since then.

Al-Mostaqbal bloc leader MP Saad Hariri called last Thursday for an agreement on a name for the president, declaring his willingness to have “serious” negotiations with Hizbullah, asking why didn't the other party negotiate with the March 14 candidate and head of the Lebanese Forces Samir Geagea.

Here Fadlallah stressed that "the national interest requires that the presidency should be for the person who has a real representation of his surroundings and of the national level, and can be a source of consensus and reconcile between the Lebanese forces."

He also pointed out that "at this stage of Lebanon's life and under these crises in our region, we can't take risks regarding an important subject related to the head of the country, the president."

Fadlallah also called on everyone to "converge with us on this national vision, which starts in the interest of Lebanon and requires the man, who should be in this position, to be able to manage this stage and transforms us to the possibility of building a country worthy of our people and the sacrifices of our army and our resistance."

He stressed that "Hizbullah has a fixed position regarding his vision of the presidency issue. "

The presidency remains vacant since May 25, the day of the expiration of the mandate of President Michel Suleiman. Since that time, the cabinet has held sixteen sessions and was unable to secure a quorum in fifteen of them.

Moreover, Fadlallah said: “The other item that restores pumping life into our constitutional institutions is the adoption of a new electoral law, as it is an essential and necessary crossing to reconfigure the authorities in Lebanon.”

Hizbullah wants it “to be a fair law that reflects the true representation at the national level and relieves any extremists attempt that prevails in some environments,” according to Fadlallah.

Person that Has Real Representation
Bkirki thinks there's four of those. But I wonder why did Hassan Nasrallah appoint Mikati PM ahead of Karame, was he a person that has real representation?

yeah, but he'll want you to ignore that fact, accountability.

Until the day I see a Lebanese citizen have the full right to free speech without fear of death, then I'll possibly take something said by any foreign group seriously. Until then? It's all talk, manipulation, and orders from outside countries, which is pathetic.

when we see the stale lies elemental posts, we start wishing there actually wasnt so much free speech in lebanon. lol

I like how they're comebacks are Iranian too, such manipulation, and very low.

In other words, HA is saying "My way or the highway" as usual which is very sad for Lebanon. Let's hope this is but a negotiation position else we are going nowhere.

nope, HA is saying the president of lebanon should be representative of lebanon. does that bother you so much? would you rather have someone who represents saudi?

the fpm have their basil and hizbollah have their fadlallah... by the way, did Miqati have "real representation" when your terrorist party appointed him PM.?

The virus Ebola ...after killing many people...will also disappear one day.

and poet. i admire your shrewd use of ellipses

Any Christian supporting a traitor, is a traitor himself.

"Hizbullah announced on Sunday that "their position is fixed""

From Wikipedia: "An idée fixe is a preoccupation of mind believed to be firmly resistant to any attempt to modify it, a fixation. The name originates from the French idée, "idea" and fixe, "fixed." Although not used technically to denote a particular disorder in psychology, idée fixe is used often in the description of disorders, and is employed widely in literature and everyday English."

Iranians do not understand the word "democracy". They want to "appoint" a president, they do not want elections. They know they can't win an election, that's the reason they are boycotting the presidential vote.

The Iranian militia also does not pay any attention to the Constitution. The Constitution requires the MP's to vote for the President. Blocking the vote by boycotting the election is not a democratic right, it is not Constitutional either.

The Iranian party does not respect the current laws. It is the right of any political party to request a change in the constitution, but it has to be done in a legal way. To change an electoral law for President (or for Parliament), the change must be voted on in Parliament, and must be agreed upon by 2/3 of the MP's. Since M14 will not agree to the M8 proposal, then M8 will have to accept the current law. M8 wants to change because they know they can't win under the current law.

Furthermore, in the absence of a president, Parliament is an "electoral body" only, until a president is elected, and must elect a president before voting on changing electoral laws.

I wish he said: "HA has a fixed position and it is to follow the constitution on electing a President".

it is just another hezbi threat... if their candidate is not elected they ll take to the streets saying the vote was corrupted...

No to Geagea kids. Keep crying your hearts out.

HA are fixated on everything & specially on Iran

Why do you call them Houthis? Is the word "Houthi" a derogatory term now?

for sectarian retards, anything can be derogatory

it is if you are one

Can someone please tell me why no other Maronite candidates put themselves forward? Are we only to have the choice between a psychotic megalomaniac ex-army leader or a criminal killer ex- militia leader? Surely the Maronite community has educated, decent, strong people who can be better representatives for our country than the filth that is being proposed...

@Banana, this is what I've been drumming for months and months now, yet much to my surprise I still don't see one Maronite candidate other than two people whom we owe nothing. Both Geagea and Aoun don't have the answers to unite the country, they both belong to a bygone era of sheer madness, surely as you rightly mentioned, there are many perfectly suited candidates, except if they are being intimidated not to enter the race. I see Demianos Kattar as being the right person for this job. What do you say?

Poor Hezbollah, they will stand next to their clown no matter what. yet today Aoun has lost a good proportion of what was once considered his majority. I personally know of many Aounis who have left the FPM never to return. This is no speculation of any kind, figures are now readily available for anyone to confirm. Also, Aoun is growing more frustrated with every passing year, despite all the support he has been given by Hezbollah, Iran and Syria, be it financial, logistics and other, Aoun is simply moving backwards. Personally? I see it happening sooner than later, Aoun going to take up residence in Deyr El Salib and his HA bosses going to Qom in Iran for a permanent retreat.