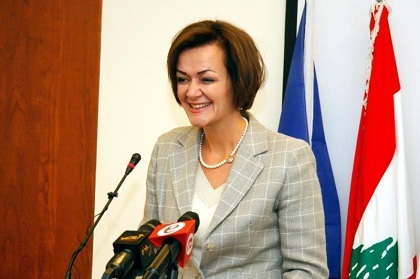 EU Ambassador to Lebanon Angelina Eichhorst has said that Lebanon “stands at crossroads,” warning that the country was suffering from the repercussions of the Syrian crisis.

“What I mean by crossroads is that you have foreign influences. All what's happening in the region is reflecting on Lebanon as a result of the crisis in Syria,” said Eichhorst.

The diplomat said in remarks published in local dailies on Thursday that EU High Representative for Foreign Affairs and Security Policy Federica Mogherini's short visit to Beirut earlier this week was aimed at sending a clear message that the “presidential elections are an urgent issue for Lebanon.”

Lebanon has been without a head of state since May when Michel Suleiman's six-year term ended. The rival MPs have so far failed to agree on a successor.

Mogherini sent a second clear message to the Lebanese that the EU has a “deep friendship” with Lebanon, which will be interpreted with more cooperation at the start of 2015, Eichhorst was quoted as saying.

She told the newspapers that more EU officials could visit Beirut in the coming months.

“We also believe that it is very important for (the representatives of) Lebanese institutions to make more visits to Brussels, so that they move forward with the EU-Lebanese partnership," Eichhorst said.

She stressed Lebanon's political and security situation will be on the agenda of the meeting of EU foreign ministers on Sunday.

“There will be a very clear reference made to what is happening in Lebanon,” she said.

Please find an exile for the caporal...any other country where he can go and plant discord and hatred.