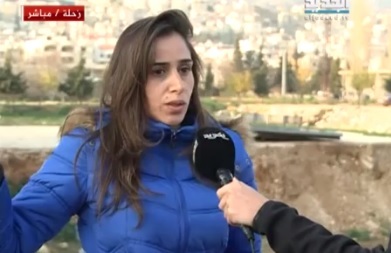 Two al-Jadeed TV journalists and a member of the Zahle Municipality were assaulted Thursday by gunmen loyal to MP Nicolas Fattoush and his brother Pierre during the filming of a TV report on the construction of a controversial cement factory.

"The colleagues Yumna Fawaz and Saad Ayyad were beaten up, threatened with weapons and detained by bodyguards loyal to Pierre Fattoush in Zahle,” al-Jadeed TV said.

It noted that Pierre is a brother of MP Nicolas Fattoush.

The two journalists were “filming an investigative report at the al-Fayda Bridge in the Zahle plain,” al-Jadeed added.

It said a controversial cement factory is being constructed in the area.

The guards of the company “intercepted the two colleagues and prevented them from completing their mission before they detained them in a room and threatened them with weapons,” al-Jadeed said.

“An army force and an Internal Security Forces unit arrived on the scene once they knew of the incident,” the TV network added.

In a telephone call with al-Jadeed, Fawaz said: “Colleague Saad Ayyad and I have been assaulted by young men from the Fattoush family.

“We are currently doing well and we're under the protection of the security forces,” she added.

The journalist clarified that she had visited the area two times in the past with the aim of preparing for the report.

Fawaz noted that she met with the factory owner, Pierre Fattoush, during her first visit, adding that “today's visit was aimed at obtaining footage of the site and conducting interviews with the residents and the municipality.”

“We met a number of residents who are opposed to the project and as we were filming on the site, two young men loyal to Mr. Fattoush arrived and starting taking pictures of us and of our car's license plate,” Fawaz added.

“At that point, I called Fattoush and informed him of what's happening and he claimed that he was not aware of it,” the reporter said.

A man sent by Fattoush and a municipality member then arrived on the scene.

“I told them that we will film the site and as I started doing my stand-up, three cars containing gunmen arrived and they pointed their weapons at us before detaining us and intimidating us for a period of around 20 minutes,” Fawaz added.

The armed men fled the scene as army troops arrived, she said.

“They threatened to kill me and said they had an order to murder us. They encircled me, seized my phone and beat me up,” al-Jadeed cameraman Ayyad said.

Zahle Municipality member Samir Mallou meanwhile told al-Jadeed that “entire Zahle rejects this project,” noting that he was also assaulted by the gunmen during the same incident.

“Some of them pointed their weapons at me and asked me to get in one of their cars, apparently with the aim of kidnapping me,” Mallou added.

He described the controversial plan to construct a cement factory as a “disaster” for the city.

Voice of Lebanon radio (100.5) reported that the head of the municipality also inspected the scene in the wake of the incident.

“No one enjoys a cover in the area and army units will stage massive raids to arrest the perpetrators, who numbered between 15 and 20 gunmen,” the radio station quoted sources as saying.

The radio network said the armed men sought refuge at offices belonging to the lawmaker near his house in Zahle.

“None of the gunmen has not been arrested until the moment,” MTV reported in the evening.

But Interior Minister Nouhad al-Mashnouq told al-Jadeed that the raids would continue until security forces arrest the perpetrators and “identify those who sent them.”

Justice Minister Ashraf Rifi for his part followed up on the case, asking Bekaa Prosecutor Farid Kallas to “expand the investigations in order to unveil the circumstances and penalize the culprits.”

Rifi stressed “keenness on the freedom of journalism” and his rejection of “any attack on journalists performing their journalistic duties.”

“This barbaric attack was perpetrated by an armed militia loyal to the Fattoush family and this is not the first incident, as the Fattoush family are accustomed to threatening people, assaulting them and abusing their influence to execute projects that violate the law and the general ethics,” Skaff added.

The ex-minister had on Thursday morning met Industry Minister Hussein al-Hajj Hassan to discuss with him the issue of the controversial cement factory.

Fattoush are nothing but criminal mafiosos

These Fattoush people are getting on our nerves. Now what is the law doing about these Fattoush, can they forever bully people? I hope not.

The thuggery of Fattoush family must be stopped at all cost.

but you don't mind the thuggery of your hizb

We are against these people. They make us look bad. We need to reel them in. Our politicians are all corrupt. There is no way these 20 guys should get away. How do you lose all 20?

MTV: Members of the Resistance Brigades opened fire at a patrol from the ISF Intelligence Bureau as it entered the Taamir Ain el-Hilweh area and the situation is tense.

THe fattouch syndrom is the epitomization of what we hate most about our politicians. corrupt, arrogant, selfish, z3ouri. This guy should be sacked from parliament. The only people who vote for him are those who are benefiting from his favors.

Not to excuse this filth but why is it when Hezbollah gunmen do just the same, no action whatsoever is taken ?