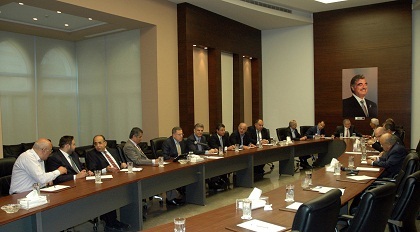 Al-Mustaqbal parliamentary bloc on Tuesday called on Hizbullah to “stop spawning armed groups” and to end its military “involvement in Syria and Iraq.”

“What happened recently in the Taamir area in Sidon was a blatant attack against security, national safety and civil peace,” the bloc said in a statement issued after its weekly statement.

It was referring to the weekend clashes between the Hizbullah-affiliated Resistance Brigades and agents from the Intelligence Bureau of the Internal Security Forces.

“Hizbullah must stop spawning armed groups under the label of Resistance Brigades or any other label," the bloc said.

It also urged the rival party to “end its (armed) involvement inside Lebanon and in the streets and alleyways as well as in Syria and Iraq.”

Calling on Hizbullah to “abide by the state's authority, rule and laws,” the bloc asked the state to “continue the crackdown on all of those who took part in the attack against security and civil peace and jeopardized the lives of citizens in Sidon.”

The bloc also discussed the recent crime in the northern Bekaa town of Btedei, urging the government and the security forces to “arrest the criminals and hold them accountable.”

Mustaqbal stressed that any political cover must be lifted off the culprits.

“Leniency in this case would topple what remains of the state's prestige and sovereignty and would also put civil peace and coexistence in danger,” the bloc warned.

The couple Sobhi and Nadimeh Fakhri were killed on November 15 in Btedei at the hands of fugitives from the Jaafar family who were fleeing army troops.

The gunmen entered the family's house with the intent of taking their vehicle but the tenants showed resistance, which prompted the armed men to shoot the couple and their son.

Turning to the issue of the captive troops and policemen, the bloc urged an end to “the storm of irresponsible statements” and to the “state of chaos and ambiguity that resulted from the involvement of a large number of mediators in the negotiations.”

“It has become a duty to quickly put an end to this horrible tragedy … as it is unacceptable to keep this major national cause as a topic for political bickering inside or outside the government,” Mustaqbal added.

“The Lebanese need a unified national stance and a unified governmental stance, according to which the hostages and Lebanon can be rescued,” the bloc urged.

The troops and policemen were abducted by jihadist militants in August during deadly clashes with the Lebanese army in and around the Bekaa border town of Arsal.

Four captives have been executed so far, and the jihadists of the al-Nusra Front and the Islamic State have threatened to kill the remaining hostages unless there is a deal to free Islamist prisoners in Lebanon.

and wow... all that talking and huffing and puffing by the farateens over a scuffle that made no victims. where were they when soldiers and policemen were killed by the dozens in saida, arsal & tripoli? hundreds of servicemen dying and being taken hostages did not get half the attention they are giving this.

they must be very desperate to be trying to hard to divert the attention away from their nusra3eshi adventures.

sure... go and attack hezbollah with your fists... we ll see how brave you are... LOL

The thugs, cowards and liars are your M14 lovers, nothing but empty insults and accusations that come out from them. But i am sure that makes you proud.

Secondly, whether you like it or not, HA and lebanese army and collaborating on so many levels. If you dont know this you're really naive.

To chad, HizEbola, an inter national terror group since it's formation by the ilgitimate revolutionary guards of the islamic rep public of iran, yhe source of exporting, funding, traning, interfering in countries around the middle east and most seen in Lebanon, Iraq and yemen. Beinh proud. Mr, of these real thugs is not of my business good for you. BUT, INTERFEARING within our national politics were taking over the country this will not be accepted and will be delt with. The fpm know they sold their souls do the hizEbola devels. THE real thugs are ready to scare the republic again color may vary between black gray it does not matter. These are your freinds chad, where did you see this in m14? God help from hizEbolas weapons and oun brains.

Your hizEbola freinds are your pride, good for you and your mom will be proud her son is affiliated with a lunatic and a freind if terrorists like hizEbola.