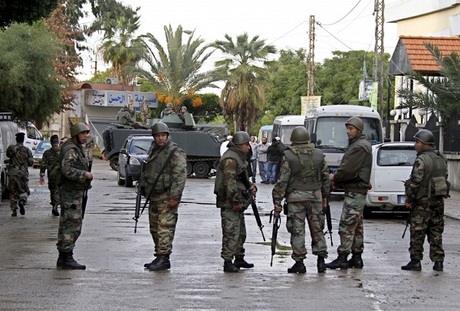 A soldier and a fugitive were injured Wednesday as an army patrol foiled a drug deal in the northern Bekaa region of Hermel.

The patrol detected "a suspicious Hyundai car that frequents the Bowaida area in Hermel,” an army statement said.

As troops were monitoring the vehicle, a pickup truck without license plates arrived on the scene “and a man called Ali Allaw stepped out of it and got into the Hyundai car,” the army added.

At that point, soldiers tried to arrest the two drivers, which prompted Allaw to try to escape in the pickup truck after opening fire at the patrol members.

Troops “responded in kind, hitting one of the vehicle's tires, which made it flip over and resulted in the injury and escape of Allaw before he was eventually arrested,” the army added.

“The driver of the Hyundai, Rabih Ajjaj, was also captured and the 500 grams of hashish that he bought from Allaw were seized in his possession,” the military said.

A soldier was lightly wounded in the operation.

The army has been implementing a security plan in the Bekaa since April, but several obstacles have hindered it according to the interior minister.

I respect Sheikh Mowaten, Sheikh Flamethrower, and their children

they do not shoot at the army! they are hizbushaitan

What is a Jiint venture among freibds? Hizboz don't want to go through government let it be hash planting ir tekecom cable planting or human parts planting add to tgat drugs for expirting all throgh ther network only depruving our economy from huge money being taken by the terror group. In any case, hope soldiers get better and hooe these hizbos go to parliament the civilized way and contribute to something in this governm ...oh yes and pay fir your electricity.

who said anything about hezbollah here? you guys are really funny to watch, bathing in your prejudice and delusions and throwing accusations left and right.

_mowaten_, is this your first attempt at sounding intelligent?

Is there a single day that goes by and this terrorist organization does not do something to undermine the state, the army, and the economy.

See? All the more reason why hash should be legalized (and its sale taxed) in Lebanon as Jumblat recently, and Berri in the '90s, proposed: Our valiant soldiers already have their hands full with real crimes, so why leave them be injured pursuing pseudo-crimes?

Agree ... for medical reasons in the USA an Canada they use it with control and approval from government and every one is happy... special plants used to calm censures by kids, contain less toxins and administered with caution, dome kids instead of having 200 censure s per months it was as low as 1 or 2 after using these special plants.

I was discussing this very same issue with our strategic formulation team at our annual retreat in the mountains. Our CEO specifically quoted your comments flamesrower on this topic. He shares the same view as you do and told us all to read your comments as an example of social responsibility and leading by example. Somesing Anazar flamesrower!