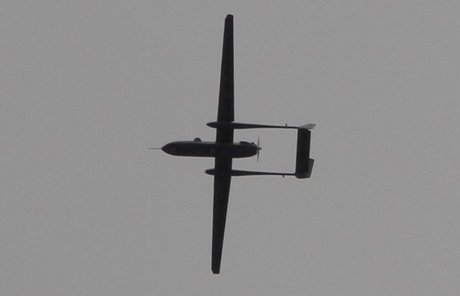 The Syrian army has claimed it shot down an Israeli reconnaissance drone flying near the occupied Golan Heights, state media said Monday.

"A military source announced on Sunday night that an Israeli unmanned Skylark-1 model drone had been shot down in Quneitra province, close to the village of Hader" near the Golan Heights, the official Sana news agency said.

It added that the downed aircraft had a range of 20 kilometers (12 miles) and had been piloted remotely from a ground station.

An Israeli military source contacted by AFP would not comment on the reported downing but did not deny the incident.

Syria and Israel are officially in a state of war, and Israel has since 1967 occupied the Golan Heights. The occupation is not recognized by the international community.

Another direct proof that Israel aids the takfiris. Surveillance is only one, out of many ways they help them.

I don't think he had any to begin with.

How come Al Nusra, Isis never shot a bullet at Israel? Syria are part of the Resistance, they supported Hezbollah in 2006 and before, when your likes cheered Israeli airstrikes, and prayed for Israeli success.

Funny Naharnet tries to hide the fact, that Israel treats takfiris from Syria in Golan. http://www.timesofisrael.com/syrian-rebel-leader-thanks-pm-for-standing-by-wounded/

The same reason why Syria has never fired a bullet onto the Israeli occupation forces within the annexed Golan Heights.

As far as I can see. It is Syrian jets being shot down, Resistance positiona being bombed. While your beloved Nusra,Qaida,Isis gets Israeli medical support, and all other forms of help see above.

The takfiris ties to Israel, has long been uncovered. But we've seen M14 & the takfiris, trying to hide that in every possible way. They fail every single time.

lol! poor FT always finding excuses for his syrian masters... sure it was easier to use Lebanon as a war field rather than trying to liberate golan... so syria stays peaceful while Lebanon suffers... glad now that the wheel spinned and your friends are in a deep sh....
but still M8 wants to drag the war into Lebanon...

fact is = you still cannot deny that syria never tried to liberate golan in 50 years... and now israel is more afraid of the islamists than of assad LOL

and yes : all your posts here are to defend the baathist regime... seems you miss it...

if you are not aware of it then it proves how idiot you are....

In a later news, 2 kids claim loosing control over their newly bought quadcopter over their neighbors home where syrian honorabke intelligence took it as downed drone, we ask them to return it since it was our Christmas present :)

So the mighty Arab Syrian army should not free its Golan heights because Israel will bomb Syria into oblivian, fair enough. So why on Gods earth is it ok for HA to attack Israel in 2006 only for Israel to bomb Lebanon into oblivion, why doesn't your logic apply to Lebanon?

Oh thank the Lord, Asma Assad can drive in Syria, all is well then I guess. Whether she and others have the freedom to have an opinion different than that of the Syrian regime is irrelevant, after all she can drive, what more does one need?

Hass1978, well well, Damm you, your bread, people think like you smell like you, talk as bad as you, if your family are like you add them to the dammed list, You and whatever you to present are real, no joke, scum and dirty. Try to insult again and you bring all the beautiful words to you and people arround you. Don't take care.

We are UAE, Eygpt, Algeria, Moroco, Jordan eyc etc and above all KSA.

all but lebanon, right?

says the supporter of a party that pledged allegiance to the islamic revolution of iran but never to Lebanon... LOL

exactly.. as you never pledged allegiance to Lebanon....

KSA helps the lebanese governments and institutions even if controlled by people that they dont adore, while Islamic Rep Public of Iran *(arien :) ), support unconditionally and and with no limit the GhizEbola yours.

what sweet sweet hearts they have. boy you must really love licking shoes.

mowaten, have you ever thought about taking your own life?

You see the difference khayo..!

the.knights.who.says.ni
Not sure how well travelled you are but insulting the president is a punitive crime in most countries including the US. And what a strange example you decided to choose to describe what freedom means to you, so according to you if you can't insult the president then your not free, but based on the language in your post, that example seems to be a good reflection of who you are so not really surprised