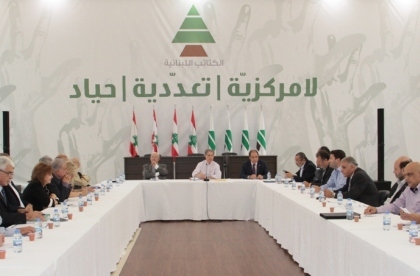 The Kataeb party demanded on Monday putting an end to the “confusion” stemming from the numerous mediation efforts aimed at releasing the servicemen abducted from the northeastern border town of Arsal in August.

It said in a statement after its weekly politburo meeting: “Decisive action should be taken regarding the negotiations in the file in order to end this confusion.”

“All efforts should be united in and limited to one official side,” it added.

Furthermore, the ministerial crisis cell tackling the case should “take the initiative out of the hands of the captors”, and clarify its vision of a mechanism to hold negotiations and later resolve this file “in a manner that will preserve the dignity of the state.”

Commenting on the ongoing presidential vacuum, the Kataeb party demanded that all internal and foreign efforts be exerted to elect a president.

The servicemen were abducted by Islamist gunmen in August in the wake of clashes with the army in Arsal.

A few of them have since been released, four were executed, while the rest are still being held.

The families of the captives have repeatedly accused the state of failing to exert enough efforts to release them.

Efforts have been ongoing in recent days to appoint a negotiator to the case, with Ahmed Fleiti, the deputy municipal chief of Arsal, saying he had a serious proposal to resolve the crisis.

They're going to ask HA to rescue the hostage beret-wearers?