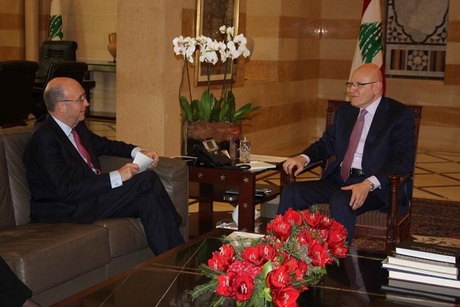 The United Nations on Monday welcomed the much-anticipated dialogue that kicked off last week between al-Mustaqbal movement and Hizbullah, hoping it will contribute to ending the protracting presidential vacuum.

“I welcomed the initiatives under way with respect to dialogue between political parties in Lebanon, including the dialogue meeting held last week between al-Mustaqbal movement and Hizbullah under the auspices of the speaker of the parliament,” U.N. Special Coordinator for Lebanon Derek Plumbly said after meeting Prime Minister Tammam Salam at the Grand Serail.

“Clearly dialogue is important for unity and stability in these difficult times. We very much hope that these steps will contribute to resolving outstanding issues, and in the first place the vacancy in the presidency,” Plumbly added.

In a joint statement issued by Hizbullah and Mustaqbal, the two parties had noted that their dialogue is not aimed at “forming a new political alignment.” They also said they are not seeking to “pressure any political force regarding the constitutional junctures (presidential vote).”

There are five topics on the dialogue's agenda – defusing sectarian tensions, the anti-terror fight, the presidential vote, activating the work of institutions, and finding a new electoral law.

The next dialogue session is scheduled to be held in early January.

Separately, the U.N. official paid tribute to Lebanon’s security forces, particularly the army, for “all the efforts and sacrifices they have made to safeguard the country in the face of grave challenges this year.”

He also welcomed “the progress made in securing international support for the Lebanese army,” describing it as a “core concern” for the United Nations.

As for the Syrian refugee crisis, Plumbly thanked Salam for “his role in finalizing and launching with the U.N. Deputy Secretary-General Jan Eliasson the Lebanon Crisis Response Plan earlier this month.”

“We discussed what steps need to be taken to help ensure an appropriate and sufficient international response to the plan,” he added.

The plan calls for an estimated $2.1 billion to help the country cope with the fallout from the conflict in neighboring Syria, while outlining the priorities of the government and international community over the next two years.

It aims to deliver humanitarian assistance to Syrian refugees while also expanding plans to invest in services and institutions in the most affected areas. It also hopes to reach some 2.9 million people, half of them Lebanese.