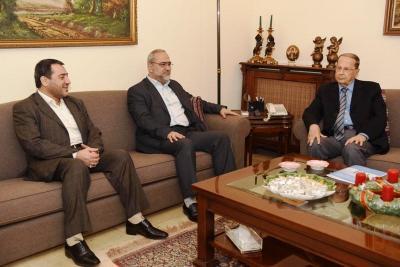 “Aoun briefed me on the talks he is conducting … We hope the next president will be an essential partner with everyone and of course we hope the General will reach” the Baabda Palace, Franjieh said after meeting Aoun in Rabieh.

The presidential post has been vacant since president Michel Suleiman's term ended on May 25. Lawmakers failed to secure the needed quorum for electing a new president despite holding 16 voting sessions, amid a boycott by the MPs of Aoun and Hizbullah.

Asked about reports that Saudi Arabia has approved of his election as president, Franjieh said he was not aware of such a development, underlining that he will maintain his support for Aoun's candidacy as long as his ally stays in the presidential race.

“We will not accept a centrist president and I'm speaking in the name of our entire camp,” added Franjieh.

Separately, the Marada leader welcomed the expected dialogue between Aoun and his electoral rival Lebanese Forces chief Samir Geagea, as he noted that “things are still in the beginning stages.”

“We hope it will yield results,” he added.

Underscoring his party's support for Aoun's presidential nomination, Qmati noted that Hizbullah's dialogue with al-Mustaqbal movement will continue, as he welcomed the preparations for holding an inter-Christian dialogue.

“As for the takfiris in the region, those who backed them in the past are fighting them today and the region is headed for a political solution,” he added.

So Little Sleiman speaks in the name of his "entire camp". By my count that is 3 Deputies.

Of course Frangieh is free to support whomever he will. It is the crux of democracy to support one side or the other and to say that he will or will not support one candidate or the other. But when Frangieh says he will not "accept" the election of a centrist, or someone other than the candidate of his choice, this is not democracy. If the candidate that you support does not win majority, the minority is not entitle to reject the election of the majority. It accepts the verdict of the electoral body and works to protect its rights and then waits for the next election.
If Frangieh was literate, he might be able to read about how democracy works.

When he says :"no centrist"; He means he can be the alternative.

M8 is not about démocracy. When m14 win the 2099 elections, they imposed a national unity government with an m8 veto power arguing that Lebanon is not a number democracy but a consensual democracy.

When m14 lost majority at parliementary in 2010, the story became suddenly different and m8 claimed the number majority.
Today rebelotte! M8 is as absurdly as ever saying that it is very democratic for mp's to abstain and render the elections of a president impossible. Either you elect Aoun or no one else.
The idea behind M8 is as simple as ever. To allow by any mean the Syrian-Iranian-hiizbollah coalition to control Lebanon. And Aoun is facilitating this big time.

Happy New Year to that...

Ebola is manipulating the caporal to maintain the void.

Do you see how they are pushing any hope of dialog down? Which us remote to begin with. HizbEbola is trying the same strategy again, take and ask for more, never give anything in return. Should we continue like this?