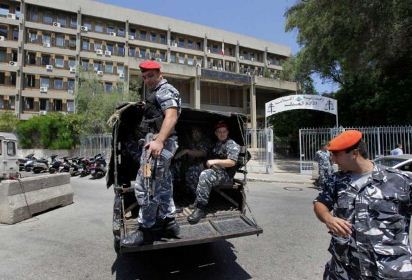 Security forces said on Monday that they arrested a man suspected of murdering a young woman in the coastal town of Kaslik that lies north of Beirut.

H.H. was apprehended in the Bir Hassan neighborhood of Beirut's southern suburbs on suspicion of killing Elianne al-Safatli near a nightclub in Kaslik, police said.

According to reports, al-Safatli died after H.H. opened fire for being denied entry to the nightclub.

Hussein Salim al-Zini from the town of al-Rashidiyeh was arrested as he was heading to a hospital in Tyre for the treatment of injuries, which he sustained during a clash with police, NNA said.

H.H? opened fire? Murdering a young woman? fled to Bir Hassan? Southern Suburbs? Shia? Resistance? No No I simply refuse to believe it.

indeed classy ya ice-toy. "Shia"? first why would this matter, unless you're trying to make sectarian incitement. and second how would you know what his sect is? you know there are people of all sects in all areas right? this is not israel where people are parked in camps according to their sect.

and who are you to judge comments. The only stupid comment and comments are always yours. Arrogant creature

and who are you to judge comments then? if you say i can't judge his, then why would you judge mine?
but most importantly, are you saying you agree with pajama.boy that a first name defines people and makes them murderers or not? i know you guys are very mentally limited, but here even you should be able to see the absurdity of it.

his comment is even more stupid when considering the fact that he was trying to make an anti-shia incitement (because he assumes hussein is a shia name) while in fact the guy named hussein is a palestinian, and therefore most certainly not shia. i'll let you draw your own conclusions on how this snake bit his own tail.

Actually the woman killed herself she was suicidal...
The problem is that today... "simple minds" knows how to write and to connect to social media.... poor imbecile

Thank you arabsecurity for stating the facts. I, like you, I blame the Lebanese Army for this murder.

للتوضيح
thank you for the link and well said

There is an interesting phenomena here that I cannot help but notice and that I'm sure many of you have as well. When the so called flame thrower is away most other M8 spammers are also away. Following his first post there is a deluge of them posting like their life depended on it. I wonder if they are all bused in like little mentally handicapped children going to the lollipop factory or do they pile into one clown car and come over together. The contents of most of their posts suggests the later. Or just maybe the spam squad are really just the one Johnny lunch pail pyromaniac AKA flame thrower.

Judicial sources confirmed to OTV the assailant is Haidar Hamieh who hails from the town of Saksakiyeh in Southern Lebanon. Mr. Hamieh was arrested earlier this morning while driving a tinted 4x4 vehicle on his way to meet a high ranking official of the iranian sectarian terrorist militia. Initial investigations with the culprit revealed he has been a member of the terrorist militia for 5 years and has participated in 2 tours of duty in the neighboring war torn Syria. Mr. Hamieh was due to leave on his 3rd tour of jihadist duty later on in the week and thought to spend sometime in a Kaslik night club. Due to his shabby appearance and foul odor, the bouncers at the club denied him entry at which time he pulled his gun and shouted " Labayka Ya Nassrallah" while firing at the unassuming crowds.
Hezbollah is an internationally recognized terror group with confirmed links to money laundering, illegal drug trade, human and organ trafficking, and terror attacks on civilian population.

"very particular set of skills (Guest)" > leaving aside the fact that your observations are pure BS, i notice you speak as if you were here all the time, since a long time, observing and studying everybody. weird for a "guest" user, isnt it?. unless you're a troll that is, and posting your BS under random fake names like we often see.

I agree with Guest (very particular) and I think mowaten and flamethrower are the same poster also.

I agree with Mowaten, and I think justin is very particular.

Why so mad, Southern? Are your initials H.H also?

95% of crimes committed in Lebanon are by shias and they are never arrested. So ZIP it.

LOL liberty gotta love your stats. 95% of sectarian incitement and fake accusations in lebanon are by m14 and they never feel ashamed.

LOL mowaten gotta love your laughs and your stats.

these are two people out of 10,000 shia criminals. Go play

Hello? Who cares where this man is from, what his name is, who he prays to?? An innocent woman was killed. A sister, a daughter, a grand daughter...
He is a cold-blooded murderer. That's all.
What is wrong with you people?