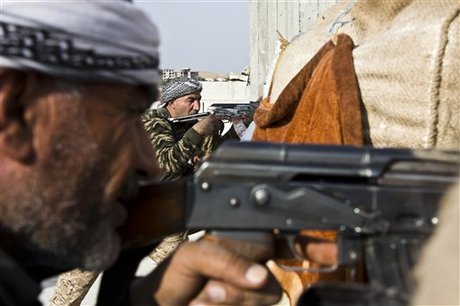 With their town liberated but largely destroyed by battles that drove Islamic State jihadists out, thousands of Syrian residents of Kobane are settling into Turkey's newest refugee camp for an indefinite stay.

Opened on Sunday just several kilometres from the Syrian border, the new compound near the town of Suruc is the largest refugee camp yet in Turkey, and has begun taking in some of the estimated 200,000 people who fled Kobane after it came under IS attack in September.

Made up of 7,000 tents capable of housing 35,000 people, the camp has been taking in around 1,000 refugees per day, site director Mehmethan Ozdemir told Agence France Presse.

But given the mass of people currently adrift in southern Turkey and northern Syria, the camp will only be able to house a portion of Kobane inhabitants.

And although IS fighters have apparently been defeated in the border city by Kurdish forces, they remain active in the countryside and authorities have warned residents against returning until the area has been fully secured.

In the meantime, months of intense street fighting and heavy air strikes against IS forces have levelled much of Kobane, leaving displaced inhabitants with little option to setting up home in the Turkish camp.

"They tell us Kobane does not exist anymore," says Adila Hassan, a 33-year-old mother beating a carpet in the newly-constructed camp as her husband looks on.

"We do not know how long we will be staying here. We will return once the town is rebuilt, (but) that's not going to happen soon."

"Return, yes, but not in the near future," agrees Anwar, a 34-year-old school teacher living several tents down.

Yet not all arriving refugees are upset by the prospect of a long stay in the camp that some estimates say cost Turkey tens of million dollars to build.

Part of Turkey's nearly $5 billion dollar effort to care for the nearly 1.7 million refugees that it has received from Syria, the Suruc camp is also issuing "each refugee, no matter their age, a debit card credited with 85 Turkish pounds (32 euros) per month" with which to purchase personal items.

"We're going to live much better here, (and) we will not be lacking anything," beamed Idam Mohammed, a 55-year-old manual worker as he lead his five-year-old son by the hand in what he calls their new "neighbourhood" in the camp.

"May God bless Turkey for what it has done for us," says Mohammed, who is hoping to encourage some of his neighbours from Kobane to take up residence in surrounding tents in an attempt to recreate Kobane until they can all return to it.

With Turkish forces blocking the border to prevent Kobane residents from returning until the town is safe, there is not much alternative to settling down in the Suruc camps or others in the region.

But even after the all-clear is given, many people from Kobane may decide the scale of destruction makes going back any time soon futile.

"In the current conditions, returning home is simply impossible to imagine," said 36-year-old Cemile Hasan. "Frankly I'd be happy if we could be home in a year. But I'm optimistic in saying that, because we're going to have to rebuild everything."

Camp director Ozdemir says if it takes that long for residents of Kobane to return, that isn't a problem.

"Our guests may stay for as much time as they want," he says, noting the camp was conceived with a longer haul in mind. "They are welcome here."