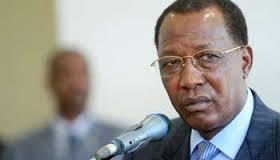 The deal was signed last week in Kenya between senior representatives of the anti-balaka rebels and the ex-Seleka movement of ex-president Michel Djotodia, but without government involvement.

Deby, however, said members of the Economic Community of Central African States (CEEAC) -- which groups 10 nations -- believed the accord "will not help the Central African Republic achieve stability and peace."

Speaking to Radio France International on the sidelines of an African Union summit in Addis Ababa, he said the region would instead focus on official peace efforts that involve the Central African Republic's transitional government.

CAR is struggling to recover from the coup that ousted president Francois Bozize and pushed the poor and unstable country into violence pitting the country's Christian and Muslim populations against one another.

Djotodia stepped down in January 2014 under strong international pressure for his failure to rein in rogue ex-rebels, who relentlessly murdered, raped and stole from civilians.

Many critics have viewed the Nairobi talks with skepticism and questioned the ability of the groups to enforce any deal on the ground.