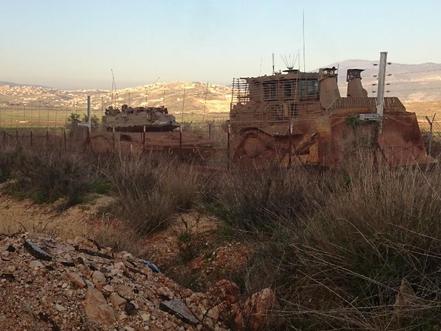 The border area facing the southern town of Kfarkila witnessed “unusual” Israeli military activity on Thursday, which was monitored by the Lebanese army and U.N. peacekeepers.

Armored vehicles carried out patrols “for the first time on the border road facing Kfarkila, along with a Merkava tank,” NNA said.

“The tank and another vehicle broke down near the border and a military bulldozer towed the two vehicles to a military post as a third vehicle patrolled along the border to provide protection,” the agency added.

The Lebanese army and troops from the United Nations Interim Force in Lebanon (UNIFIL) monitored the Israeli movements, NNA said.

The Israeli activity comes after a major border flareup on January 28 between Hizbullah and Israel that followed a missile attack in the occupied Shebaa Farms. Two Israeli troops were killed and seven others wounded in Hizbullah's operation.

The group said its assault was in retaliation to an Israeli air raid on one of its convoys in the Syrian region of Quneitra that killed six Hizbullah fighters, including prominent members, and a senior Iranian general.

A few days after the operation, Hizbullah chief Sayyed Hassan Nasrallah announced that his group “no longer recognizes” any rules of engagement in the conflict with Israel, as Tehran warned that there will be further retaliatory attacks.

So you hope your Zionists masters will come and save you? How cute. But they're too scared.