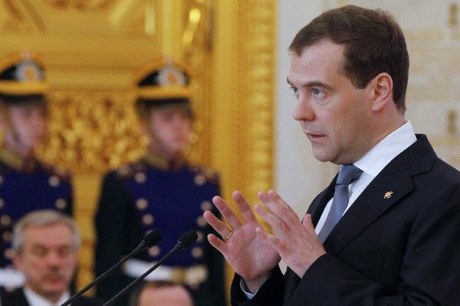 Ukraine must pay for Russian gas being supplied to rebel areas in the country's war-torn east, Russian Prime Minister Dmitry Medvedev said Friday, raising the possibility of another gas dispute in the midst of winter.

Ukrainian state firm Naftogaz had warned that it would not pay for deliveries to rebel areas.

"According to existing contractual obligations, Kiev must pay for the Russian gas," Medvedev wrote on his Facebook page.

Medvedev said Ukraine's current payments would only cover three of four more days of supplies at current volumes, taking into account the new shipments to rebel bastions Donetsk and Lugansk.

Russia only supplies gas to Ukraine when it is paid for in advance.

Medvedev said in a statement on his website that referenced his talks with President Vladimir Putin that "we will have to, as usual, make a difficult decision" if Kiev did not pay.

The prime minister said however that Russia "will continue to deliver gas," adding that supplies to separatist areas in eastern Ukraine were being done for humanitarian reasons.

Naftogaz confirmed the cut-off in the east and said it had been due to pipeline damage caused by fighting, but said that it later resumed supplies.

Ukraine says Russia has backed the rebels with troops and weapons in the conflict that has wracked the country's east since April. Russia denies the allegations.