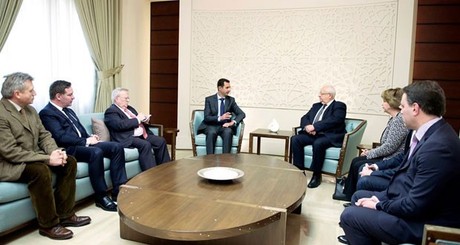 Syrian leader Bashar Assad no longer wants to "remain isolated in the face of the terrorist threat", one of the French lawmakers who met him in Damascus on a much-decried private trip said Friday.

Senator Francois Zocchetto was one of several lawmakers who travelled to the Syrian capital and met with high-ranking officials including Assad on Wednesday.

The visit drew an angry response from the French government, which cut diplomatic ties with Damascus in 2012.

"Bashar Assad is reserved, he does not easily confide in people," Zocchetto told Radio Classique.

"He said he expected to no longer remain isolated in the face of the terrorist threat."

The trip was feted by Syrian media as reflecting rising sentiment within Western countries that their governments should re-engage with Assad to try and resolve the four-year conflict and rein in the radical Islamic State (IS) group, which controls swathes of the country.

But both French President Francois Hollande and Prime Minister Manuel Valls condemned the lawmakers' talks with Assad, whom they described as a "dictator" and "butcher."

"(They) have taken it upon themselves to meet with a dictator who is the cause of one of the worst civil wars of recent years," Hollande told reporters during a visit to the Philippines.

Zocchetto said both the head of the Senate and its foreign affairs commission were made aware of the private trip.

He added that one of the other lawmakers on the visit -- Gerard Bapt from the ruling Socialist party, who did not attend the talks with Assad -- had also informed the presidency and the foreign ministry.

"We do not carry an official message from the French government," Zocchetto said.

"It's hard to say that we want to fight against terrorism in France and ignore what is going on in Syria.

"This secular state could disappear tomorrow... because right now there is no longer any moderate Syrian opposition."

He is the Butcher, the greatest criminal and assassin of all times. There is no discussion about this. Full stop.

Only criminals are the takfiris, you hold so dearly.

poor miss tic, always living in denial that the one he supports is like isis and even worse!

Assad is a dictator, and his father was a butcher, too. But he and his regime are the last piece holding Syria together and those wishing him to fall pretty much have egg on their face.

Agreed, he maybe too agreessive in his campaign to quash the rebels in his countries civil war but you are absolutely right. As the French lawmaker stated, there are no longer any moderate rebels that can be trusted. All are terrorists and Takfirists are all that remain. The US and the western countries are maybe training so called moderate rebels but in actuallity may be training future Takfirists and Jihadists that will only turn against the West and everyone. The so called moderate rebels can switch alliance and or sell its West supplied weapons to Tafirists in an instant. Assad, whether you like it or not is the superglue that is preventing Syria from total anarchy. This I truly believe.