U.N: West, Central Africa in One of Worst Cholera Epidemics 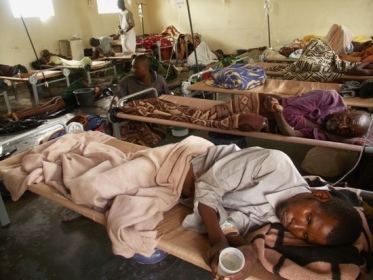 The west and central Africa region is facing one of the worst cholera epidemics in its history, with over 85,000 cases reported leading to 2,466 deaths this year, the U.N. children's agency warned Tuesday.

"The size and scale of the outbreaks means the region is facing one of the biggest epidemics in its history," said a UNICEF spokeswoman.

"The most significant increases in 2011 are in Chad, where it is the largest outbreak recorded, in Cameroon where nine out of 10 districts are reporting cases and in western Democratic Republic of Congo where case fatality rate is above five percent," she added.

In some districts, fatality rates are as high as 22 percent.

U.N. agencies also noted that outbreaks were occurring in places where cholera was not endemic.

"You have cases happening outside of a typical cholera season, you also have them occurring in a wider geographical area.

"In central Africa, they just declared a cholera outbreak. They haven't had cholera in years. This means that people are less aware of how to prevent or respond to an outbreak of cholera," the UNICEF spokeswoman said.

In addition, high fatality rates are being recorded in places where cholera is not endemic.

"In the Democratic Republic of Congo, we have this year outbreaks in provinces that we have not seen in the last 10 years," said a WHO spokesman.

"There we see a case fatality ratio much higher than in provinces where cholera was endemic like north and south Kivu," he added.