Mazloum Warns of Wider Gap between Rivals, Collapse of Cabinet 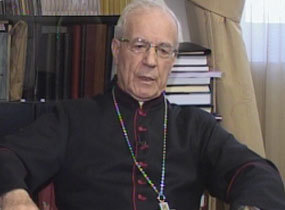 Maronite bishop Samir Mazloum expressed regret on Monday over the verbal spat between political arch-foes over the situation in Yemen, hoping that dialogue would defuse tension and preserve the cabinet.

“As long as there is a will to continue talks, then there is hope that we could reach progress,” Mazloum said in comments published in the Kuwaiti newspaper al-Seyassah.

He stressed the importance of carrying out a binding dialogue by all rivals.

Tensions between al-Mustaqbal movement and Hizbullah soared in the wake of Saudi Arabia's Arab-backed military operation against Yemen's Shiite Huthi rebels. The air campaign, launched in late March, is aimed at defeating the Iran-backed rebels and restoring power to President Abderabbo Mansour Hadi.

Both the Huthis and Hizbullah are backed by Iran.

Mazloum warned of the collapse of the cabinet of Prime Minister Tamma Salam, considering it will have a “dangerous impact on the country amid the ongoing presidential vacuum.”

Vacuum striking the presidential post is having a tough impact on the cabinet and the parliament as the state is threatened with further crises over ongoing rows between the rival parties.

Concerning Maronite Patriarch Beshara al-Rahi's expected visit to France, Mazloum expressed hope that Paris would have an initiative to end the presidential deadlock.

He anticipated a “fruitful” meeting between al-Rahi and French President Francois Hollande, hoping it would end obstacles impeding the election of a new head of state.

Al-Rahi will travel to France in the upcoming days for the inauguration of Europe's Maronite Diocese in the town of Meudon in the French capital's suburbs and will meet prominent officials.

To Mutran Al Da7yieh:
Excommunicate the Caporal who is destroying the Christians

flame and port the shiites pretending to be christian by their silence agree with you that the maronites are usurping the alleged shiite majority's democratic rights through clause 24 which guarantee christians and muslims get equal shares. no surprise giving that they both speak for hezballah and hezballah was against the equal sharing from the start.

Do not worry. Your Caporal will explode soon.