U.N. Says Half a Million Yemenis Displaced as Capital Pounded 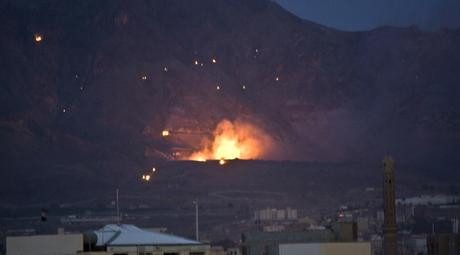 The United Nations said more than half a million people have been displaced in the conflict in Yemen, whose capital was bombarded Tuesday for the first time since a ceasefire ended.

Hopes faded for a political breakthrough in the two-month conflict as a U.N.-sponsored peace conference originally set for next week was put on hold due to the resumption of fighting.

A Saudi-led coalition has waged an air war on Iran-backed rebels in Yemen since March in an effort to restore the authority of exiled President Abedrabbo Mansour Hadi, who fled to Riyadh.

The U.N. refugee agency said its assessments on the ground during the five-day ceasefire had "exposed enormous difficulties for thousands of civilians displaced by conflict".

The World Food Program said while the pause was "not long enough to reach all those in need", it had managed to deliver food to 400,000 people, just over half the 738,000 it had aimed to help.

After the ceasefire expired at the weekend, the Saudi-led coalition resumed its bombing early Monday with raids on second city Aden, accusing the rebels of violating the truce.

"They did not respect the humanitarian pause. That's why we do what is necessary to be done," spokesman Brigadier General Ahmed al-Assiri told AFP.

Witnesses said the targets included the Republican Guard missile brigade base in Fajj Attan, south Sanaa, where strikes last month set off a chain of explosions that killed 38 civilians.

An arms depot in Mount Noqum, on Sanaa's eastern outskirts was also targeted, as well as a house of Saleh in his Sanhan hometown, south of the capital, witnesses said.

The coalition also hit air defense and coastguard bases in Hodeida province, as well as targets in the central provinces of Taez and Ibb, and in Daleh and Aden in the south, they said.

A three-day conference in Riyadh boycotted by the rebels wrapped up with the participants publicly backing Hadi and calling for safe zones allowing his government to resume its duties.

It came as a planned, U.N.-brokered meeting of Yemeni political groups in Geneva was suspended indefinitely.

"Part of the problem is that the fighting has once more resumed," said U.N. spokesman Farhan Haq.

"We want the fighting decisively stopped and then we can get about to organize and invite people to the conference."

U.N. Secretary General Ban Ki-moon appealed to "all parties to create the conditions leading to a permanent ceasefire".

A U.S. State Department spokesman said dialogue would ultimately be "the only solution to the crisis," calling on the Huthis to "indicate their readiness and their willingness to come back to the table as part of a U.N.-led process".

Iran, a key ally of the Shiite Huthi rebels, called for an end to the "barbaric" Saudi bombing, and said Riyadh was not a suitable location for peace talks.

The ceasefire allowed supplies of petrol and food to be delivered to Yemen but anti-Huthi groups accuse the rebels of confiscating the aid.

"The truce has only served the aims of the militia, which has increased its readiness and stocked fuel through aid that arrived in their areas of control," said a statement from pro-Hadi forces in the central city of Taez.

A coalition spokesman said the rebels had "hijacked" food and fuel aid.