Jumblat Appeals for Preserving Stability over IS Fears 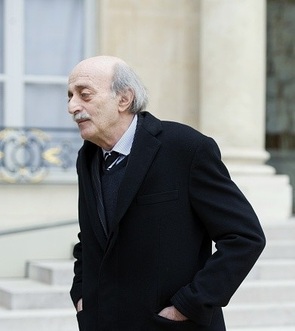 The western city of Palmyra, home to a set of historic Roman-era ruins, was captured by the IS last week.

“After the IS reached Palmyra – and it could even expand more than that – the national priority is to preserve the government and stability,” Jumblat told As Safir daily published on Wednesday.

“This priority should overcome all differences,” he said.

Asked whether he backed calls for the army to lead a campaign against jihadists on the outskirts of the northeastern border town of Arsal, Jumblat said: “The government decides” such issues.

Hizbullah openly joined Syrian President Bashar Assad forces in the civil war in 2013 and its fighters have been taking part in a major battle in recent weeks against jihadists from the IS and al-Nusra Front in the Qalamoun mountain region that borders Lebanon.

On Sunday, Hizbullah chief Sayyed Hassan Nasrallah vowed his fighters will expand their involvement in Syria's war in support of government forces.

But the Lebanese army has been only stopping infiltrations of jihadists into eastern border towns and on several occasions has clashed with them inside Lebanese territories.

Dear Jumbo,
It is timefor you to take a courageous stand. Never forget who assassinated your father.

Well I would much prefer lunatic jeddo passing away first. It will be a sigh of relief for the country

My pleasure my friend

@ayatollah_aounallah, may jiddo go first, Jombie may not be much of an improvement over jiddo, but nothing parallels Aboul Mish in acts of sabotage. There's a joke about the Clauon, when he died, quite naturally he arrived at the gates of heaven where Saint Peter was there to pass on judgement over him, but even before Saint Peter could utter one word, Jiddo Aboul Mish asked Saint Peter what was he, Saint Peter doing there because jiddo said that the post was his. Just to show you how mad this man is.