Once Bustling Niger Border Town in Lockdown over Boko Haram 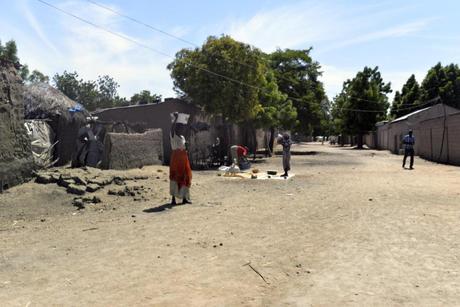 A soldier in fatigues furiously pedals his bicycle through the alleyways of Diffa, puffing away after the biggest town in southeast Niger banned motorcycles -- vehicle of choice of jihadists.

Situated on the border with northeastern Nigeria, the heartland of Boko Haram insurgents, Diffa is on high alert since it was attacked in February.

Banning motorbikes like those reportedly used by the Islamists in their Diffa assault is just one of several emergency measures taken by authorities in the region to boost security.

Gone are the hundreds of motorcycle taxis known as kabu-kabu that once chugged across town day and night.

Dozens of rusting two-wheelers also lie abandoned on the road linking Bosso -- which also came under Boko Haram assault -- and Malam Fatori, a Nigerian town across the border retaken from the militants in April.

"There haven't been any attacks since we stopped motorbikes from circulating. The people can sleep well," Diffa's governor Yacouba Soumana Gaoh said.

The official acknowledged that the travel restrictions had cost some kabu-kabu drivers their livelihoods, but claimed that "those who want us to let them go back to work are pro-Boko Haram".

Boko Haram's assaults on Diffa and Bosso were unsuccessful. But a subsequent raid in April on an island in Niger's side of Lake Chad, in which 74 people were killed, showed the country remained vulnerable.

The jihadists' bloody six-year insurgency in northeastern Nigeria and bordering areas of neighbouring countries has killed over 15,000 people.

Now, as security improves in Niger, some of the residents who had fled are returning, and the market in Diffa is back in business.

"But that doesn't mean life has gone back to normal. There are barely any students here, there is no one on the streets, and army soldiers are everywhere," one trader complained.

Hundreds of police and soldiers from Niger and neighbouring Chad, and some of the French troops deployed in the region since August 2014, throng the scorching hot, sandy Sahel town.

A strict curfew means no cars or other vehicles are allowed to circulate after 8 pm. People are allowed to walk on the street, but very few take the risk.

"By night, we hear machine-gun fire, which are often warning shots," a U.N. source said, speaking to Agene France Presse on condition of anonymity.

"The security situation has improved in Diffa, but the fear remains," said another source, who is in charge of security for a U.N. agency.

The heavy military and police presence aims to send a reassuring message but some people in Diffa fear Boko Haram fighters are still slipping across the border, mixed in among the thousands of Nigerian refugees fleeing to Niger.

"In this asymmetric war, we don't know who is who. The shopkeeper where you buy your groceries might be arrested tomorrow," a third U.N. worker said.

As a precaution, the entrances to state institutions, including the police station and the town hall, are barricaded by old tyres and sandbags.

In the heart of a residential neighbourhood, a military vehicle mounted with a machine gun stands guard.

Human rights activists have criticised the militarisation of the area and widespread paranoia.

"As soon as you criticise the authorities, they can accuse you of being a Boko Haram accomplice," Kiari said, deploring a lack of freedom of expression.

Another of the group's activists, Moussa Tchangari, has been charged with making remarks "likely to demoralise the army" and "violating national security" for criticising the government's handling of the humanitarian crisis sparked by the exodus of people from the Lake Chad area.

Civil society groups have also condemned the arrest of hundreds of people suspected of Boko Haram links. Some of the detainees have disappeared, they say.

"In the beginning, Boko Haram was not hidden from sight. Everyone knew who its members were and what mosques they frequented," another activist said.

While some of his acquaintances were previously lured by money into joining the radicals, he says local Boko Haram recruits have now either been arrested, returned to Nigeria or died.

Four months after the start of a regional fightback against Boko Haram, Niger and Chad claim to have gained the upper hand in Diffa.

"They mobilised nearly 2,000 men to surround ours. That's why they had the advantage... But in terms of pure fire power, they just don't match up," he said.