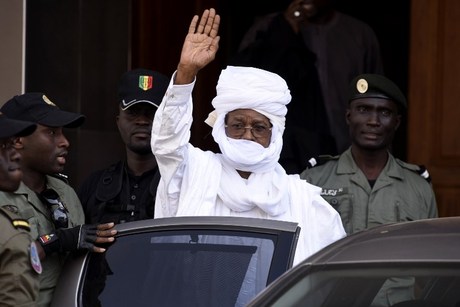 Former Chadian dictator Hissene Habre refused to answer questions at a hearing Wednesday ahead of his trial for a string of atrocities he is accused of committing during his presidency, his lawyer said.

Rights groups say 40,000 people were killed during his eight years in power in Chad under a regime marked by fierce repression of his opponents and the targeting of specific ethnic groups.

He appeared briefly before the Extraordinary African Chambers in preparation for his trial for torture, war crimes and crimes against humanity, due to begin in Dakar on July 20, a court official told AFP.

Dressed in a white robe and turban, he remained silent throughout a 20-minute interrogation aimed at establishing personal details, said Ibrahima Diawara, one of his lawyers.

"There is no reason to participate in what is not a trial. Habre does not recognize the legality or legitimacy of the Extraordinary African Chambers," Diawara said.

Habre waved at about a dozen cheering supporters before getting into a car after the hearing, according to an AFP reporter outside the court, which was closed to the media and public.