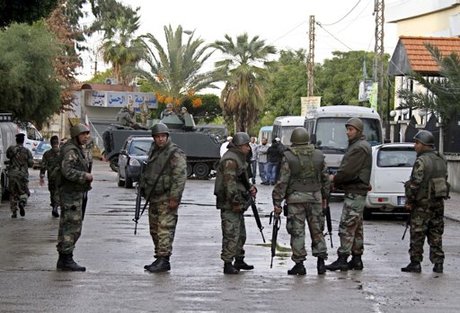 The army arrested on Wednesday a number of Syrians on suspicion of their links to terrorist groups.

It said in a communique that nine Syrians were detained in al-Hinnieh in the southern city of Tyre and in al-Labweh-Arsal region in the Bekaa.

Palestinian refugee Mohammed Khalil Hammoud was also arrested for taking part in fighting against the military in Arsal.

In Beirut, continued the communique, the army arrested two Lebanese on shooting charges.

They had in their possession two rifles, a handgun, a quantity of ammunition, three wireless communication devices, and various military gear.

In the Ruweisat al-Jdeideh area in al-Metn, the military detained 13 Syrians for not having valid legal documents.

All the detainees have been referred to the concerned authorities for investigation.

The army had in recent months intensified its efforts to maintain stability in Lebanon by making a number of arrests against a number of suspects connected to various security incidents that had taken place in the country.