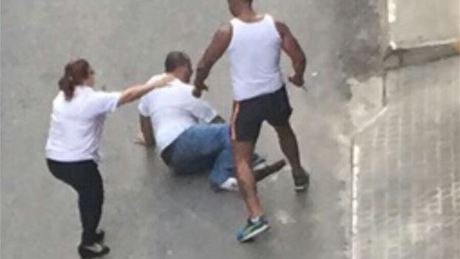 A motorist chased another driver from the airport road to Ashrafieh to stab him with a knife after a dispute over traffic priority, media reports said on Thursday.

The stabbed man, 45-year-old George al-Rif, was critically injured before dying of his wounds in hospital while the assaulter, Tareq Yatim, was arrested Thursday in Ashrafieh, state-run National News Agency reported.

“Army intelligence agents from the Ashrafieh department have managed to arrest Tareq Yatim, who had stabbed George al-Rif in Ashrafieh,” NNA said, noting that the victim has four children.

It said al-Rif was driving on the airport road when a dispute over right of way erupted with Yatim, who kept chasing him to the Ashrafieh area in Beirut, where he dealt him several stabs to the body and head.

Al-Rif succumbed to his wounds in the evening, according to NNA.

MTV said Yatim has confessed to committing the attack, noting that “he has a criminal record containing charges of assault and drug abuse.”

Some media reports said he was under the influence of drugs when he was arrested.

LBCI television said Yatim is “a bodyguard of an influential figure in the area.”

Make an example of this monster, please!!!

They should fry him. Must be a lesson.

Please free him...what a stupid country we live in. This guy should be HANGED right away.

He might be a sunni Muslim, but that wouldn't change a bit the punishment he deserve, my own opinion.

So sad. Poor children. If the reports that their father is brain dead then they will have to grow up without a father. Too much steroids pumping up the muscles of small brained men in Lebanon. I hope that this "influential figure" that the stabber worked for doesnt seek to prevent justice in this case.

UN520, you're right indeed, this is why the relatives of Al Rif must take revenge and find any way possible to kill this bastard. He killed Al Rif, Al Rif's siblings now must make it their priority to take his revenge, blood for blood, nothing less, nothing more.

Carrying a knife to defend himself = coward

Horrible crime. I was disgusted by how people stood by and watched, no one did anything to help. What happened to us!! Ashrafieh born and bred, I am ashamed. We used to watch out for each others, our neighbors!

Tarek Yatim was caught on several cams stabbing a man already who was defenseless. This thuggery must not be allowed to continue anymore, our authorities must hand him at the very earliest, and if set free, then let everyone who wants justice make of this SOB his target. There are times when a tooth should be traded for a tooth, this filthy coward must not be left unchecked, he should be sought and killed the same way he killed this family father.

the storyline is not accurate