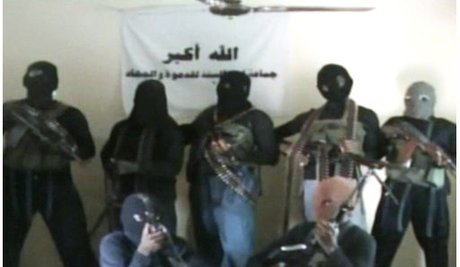 A court in Chad sentenced 10 suspected members of Boko Haram to death Friday for a double suicide bombing that killed 38 people in the country's capital N'Djamena in June.

"The 10 Boko Haram defendants have been condemned to death," according to the ruling in the country's first trial of presumed members of the Nigeria-based Islamist group.

Nigeria's neighbors Chad, Cameroon and Niger have all suffered attacks by Boko Haram and earlier this year they announced a regional force to end the militants' insurgency that has claimed more than 15,000 lives since 2009.

The defendants were accused of criminal conspiracy, killings, willful destruction with explosives, fraud, illegal possessions of arms and ammunition, as well as using psychotropic substances.

The accused include Nigerian national Mahamat Mustapha, also known as Bana Fanaye, who according to Chadian authorities masterminded the June 15 suicide attacks that struck a school and a police building in N'Djamena, killing 38 people and injuring over 100.

Shortly after Fanaye's arrest in late June, Chad's top prosecutor Alghassim Kassim said the suspect was the "ringleader of a network smuggling weapons and munitions between Nigeria, Cameroon and Chad".

Chad has beefed up security in response to the bloodshed.

The 8,700-strong regional force against Boko Haram is expected to number some 8,700 troops and police, but it has yet to go into action.