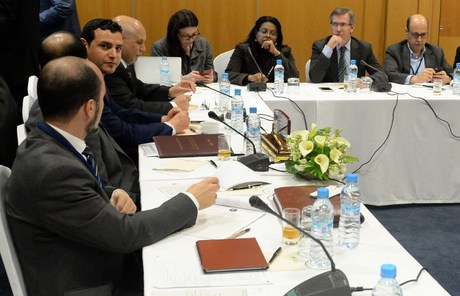 Algeria, Niger and Chad on Sunday stressed the urgency of creating a national unity government to solve the conflict in their neighbor Libya.

Algeria's African affairs ministers and the foreign ministers of Niger and Chad stressed the importance of such a government "to preserve Libya's unity and territorial integrity and its people's cohesion."

This would allow Libya to tackle the many challenges it faces "with the help of the international community," Abdelkader Messahel, Aichatou Kane Boulama and Moussa Faki Mahamat said in a joint statement quoted by state news agency APS.

Libya, which borders Algeria to the west and Niger and Chad to the south, has been wracked by violence since the NATO-backed uprising against longtime strongman Moammar Gadhafi in 2011.

The North African country has two rival parliaments, the General National Congress in Tripoli and the internationally recognized government based in the east.

A unity government deal could be reached "in the coming days," U.N. envoy to Libya Bernardino Leon said on Friday, a day after the rivals resumed peace talks in Geneva.

The United Nations hopes that the talks could lead to an agreement being signed by September 20, with a unity government coming into force a month later.