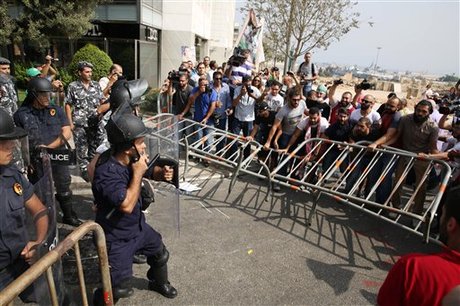 Lebanon's rival leaders met on Tuesday for the third round of national dialogue amid heavy reinforcements made by security forces to stop protesters from reaching the parliament building in downtown Beirut's Nejmeh Square.

A terse statement said the conferees focused on the issue of the presidential vacuum and that the next rounds of national dialogue will be held on October 6, 7 and 8.

He however said that the dialogue parties will not agree on a new president “unless they take us to the Seychelles islands.”

Meanwhile, Change and Reform bloc leader MP Michel Aoun “gave up his demand on electing a president by a popular vote and spoke of a proportional representation (electoral) law based on 15 electorates,” LBCI television said.

Media reports said the meeting tackled the controversial issue of the promotion of army officers.

“A settlement over military appointments failed after Saniora rejected it,” MTV said.

Police had put concrete blocks as part of exceptional security measures they took near the square and the roads leading to it, a security official said.

The official told al-Joumhouria newspaper that police would confront any attempt to breach the erected barrier.

Despite the police measures, activists gathered in the area wearing sportswear with printed slogans demanding to topple the regime.

They began throwing footballs from across the barrier after writing slogans on them.

“We are playing here the same way they (the officials) are playing,” said one of them.

On Sunday, hundreds of protesters pushed through a security cordon as they marched toward parliament. It was the latest in a series of demonstrations that began with a trash crisis following the closure of the Naameh landfill but has since expanded to target the country's political class.

After more than an hour of standoff and some scuffles, protesters broke through the cordon. Police let them into the street leading to the square and the parliament, but set up a new cordon closer to the parliament building.

The official also told al-Joumhouria that security forces took extra measures near the Justice Palace in Beirut after a previously unknown group naming itself the “Nation's Cry” held a sit-in in the area to call for distancing the judiciary from corruption.

The all-party talks chaired by Berri began last month after the eruption of the anti-government protests.

The movement is growing to include different groups with varied grievances about government dysfunction. There has been recurrent friction between police and protesters.

Bassil told An Nahar that the FPM's "stance is clear."

"The people are the source of all powers,” said Bassil, who recently took over the FPM leadership from Aoun.

The movement has been calling for direct presidential elections to resolve Lebanon's political crisis which erupted when Michel Suleiman's six-year term ended in May last year.

Baabda Palace has been vacant since then.

The presidential deadlock tops the agenda of the all-party talks, which are expected to tackle the resumption of the work of parliament and the cabinet, a new electoral draft-law, legislation allowing Lebanese expats to obtain the nationality, administrative decentralization and ways to support the army and the Internal Security Forces.

To Whom It May Concern
I, the_roar, a well respected, heavily voted, liked, and admired shia poster with 56 accounts (3rd generation Australian) on naharnet hereby declare that until further notice I suspend my membership in this forum similar to what MP Emile Rahmeh ( who got the highest votes in the last elections ) did when he suspended his membership in the Lebanese Parliament in SOLIDARITY with the unlawful, unjustified, and oppressive decision by the administration of this forum to ban my fellow shia poster Flamethrower.
Let it be know to all that such practices by management contradict with the basic fundamentals of the Iranian constitution and free speech in North Korea.
I remain,
Signed
the_roar

Rivals ? Of course rivals...."as long as you don't elect ME, you are my rivals" said the destroyer...

Our great democracies still tend to think that a stupid man is more likely to be honest than a clever man, and our politicians take advantage of this prejudice by pretending to be even more stupid than nature made them

Whenever the leaders have to put up barricades to protect themselves from the people that they are supposed to represent, there is a breakdown in representative government and a loss of legitimacy of the so-called leaders. Who do they lead? What is the source of their power? In a democratic society the source of a leader's power should be popular support for the leader and his policy agenda.
In Lebanon, a leader's power is derived from his bankroll derived from begging money from foreign governments and executing political mortgages to foreign governments in return. The people are mesmerized by the bankroll and ignore how it was obtained and at what price.

With new elections, in the present environment with garbage all about, they will all be tossed out of office, that's why they extend their supposed mandate from 2009, a date getting more and more into the distant past.

Lebanon's politicians will continue to perpetuate their enmity in public, only in public, but privately they have agreed to continue deceiving the people, if they are not removed from power now, they will be there for the next 10 years, and the same dance will only continue and with the very same tune. But then besides the point, I am also very much against the protesters, any protesters throwing anything on our security forces, no matter what the grievances are, there is simply no excuse to show any form of violence, be it security forces or other, either we win this war peacefully or we have already showed signs of losing it, damn it, stop throwing things on the police !!!

For the wise voice against violence in demonstrations,
THANK YOU PHOENIX1,
And mostly THANKS TO MICHELLE TUEINI for her latest article in annahar.
With the chaos the biggest loser will be the majority of good will non violent population,
The winners will be these violent thugs serving their masters.
The voice of the truth will be better heard in peaceful demonstrations.