Family of Lebanese Abducted in Libya Blocks Road in Mhammara 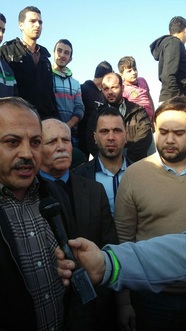 The family of two Lebanese young men abducted in Libya on Sunday staged a sit-in in the northern town of Mhammara during which the international highway was briefly blocked.

“Relatives of the two young men Mohammed and Khaled Nazha staged a symbolic sit-in during which they briefly blocked the international Minieh-Abdeh highway in the town of Mhammara,” state-run National News Agency reported.

“We have not witnessed any serious stance from the Lebanese foreign ministry over this humanitarian case and it has instead ridiculed and downplayed the issue, reducing it to a financial dispute, although the captors have repeatedly announced in video recordings that the kidnap is aimed at swapping them for Hannibal Gadhafi,” the family said in a statement.

It was referring to two Internet videos in which the kidnappers demand the release of Gadhafi from Lebanese prisons in return for the Nazha brothers' freedom.

Lebanon's foreign ministry dismissed the claims on Wednesday, noting that the kidnap is not related to Gadhafi's arrest in Lebanon but rather to a “financial dispute.”

The two men “were abducted in Benghazi around a month ago over a financial dispute between them and their partners in the carpentry business,” the ministry quoted Lebanon's ambassador to Libya Mohammed Skaineh as saying.

The incident “has nothing to do with” Hannibal's case “seeing as the kidnap occurred prior to his arrest,” the ministry added in its statement.

But the family stressed on Sunday that the ministry “has a duty to protect Lebanese expats abroad.”

It also urged Justice Minister Ashraf Rifi to “expedite Gadhafi's case in order to reach a humanitarian solution to this issue.”

A video featuring still pictures of the two men and the voice of an unknown man had surfaced Wednesday on Facebook and YouTube.

The video shows the two men holding banners carrying their names, ages and Lebanese addresses. The banners also carried an appeal to Prime Minister Tammam Salam saying the abductees' fate is now linked to that of Hannibal Gadhafi.

“Release him in return for our freedom,” says the appeal.

“This is a response to the unethical operation that was carried out by Lebanese elements who abducted Captain Hannibal Moammar Gadhafi,” says a man identifying himself as a member of the so-called special missions unit of the Martyr Mutassem Billah Moammar Gadhafi Brigade.

Hannibal Gadhafi was kidnapped in a Syrian area near the Lebanese border on December 11 before being smuggled into Lebanon's Bekaa region. He was handed over hours later to Lebanese security forces.

Lebanese authorities have charged Hannibal with withholding information about the disappearance of revered Shiite cleric and founder of the AMAL Movement Moussa al-Sadr, who vanished in Libya in 1978 along with two companions.

A security source told AFP that investigators discovered that ex-MP Hassan Yaaqoub had orchestrated an elaborate scheme to seize Gadhafi from Syria and bring him to Lebanon. Yaaqoub was arrested after several days on charges of involvement in Hannibal's abduction.

Yaaqoub is the son of Sheikh Mohammed Yaaqoub – one of the two companions who disappeared with al-Sadr in Libya in 1978. Al-Sadr's Libya visit was paid upon the invitation of then Libyan ruler Moammar Gadhafi – Hannibal's father.

The three were seen lastly on August 31, 1978. They were never heard from again.

The Lebanese judiciary had indicted Moammar Gadhafi in 2008 over al-Sadr's disappearance, although Libya had consistently denied responsibility, claiming that the imam and his companions had left Libya for Italy.

The article does not mention the Foreign Ministry later apologized to the families!