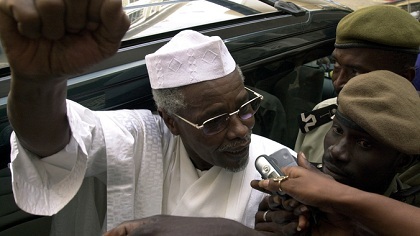 Chad's ex-dictator Hissene Habre had the "power of life and death" over his people, a lawyer for victims of atrocities carried out during his 1980s reign said Monday at his war crimes trial in Senegal.

Habre who was president of the semi-desert central African country from 1982-1990, is charged with war crimes, crimes against humanity and torture -- the first time a despot from one African country has been called to account by another.

On Monday lawyers representing victims began presenting their closing arguments to the Extraordinary African Chambers, a special court established in Dakar by the African Union under an agreement with Senegal.

"The testimony is unanimous. No-one could do anything without taking it up with the President of the Republic," lawyer Yare Fall said, summarizing the accounts provided by scores of witnesses, who described the horror of life in Chad's prisons during his watch.

Once backed by France and the U.S. as a bulwark against Libya's Moammar Gadhafi, Habre was toppled in 1990 and went into exile in Senegal, where he was arrested in June 2013.

An investigating commission found that well in excess of 40,000 people were killed during his rule, which was marked by fierce repression of his opponents and the targeting of rival ethnic groups.

Among the torture described by former prisoners was the "Arbatachar," in which all four limbs were tied behind the victim's back, causing agonizing pain and sometimes paralysis.

Not only did Habre "not take the necessary measures to prevent crimes being committed" against civilians, he also failed to punish them when they came to light, Fall continued, declaring: "He had the power of life and death over the people of Chad."

Habre, who was ousted by Chad's current President Idriss Deby Itno, has refused to address the court whose authority he does not recognize.

The 15 plaintiffs' lawyers are expected to finish presenting their closing arguments Tuesday, after which the prosecution and the defendant's court-appointed lawyers will have the floor.

The court is expected to return its verdict in late May.