Chad Opposition Shuts down City in Protest against President 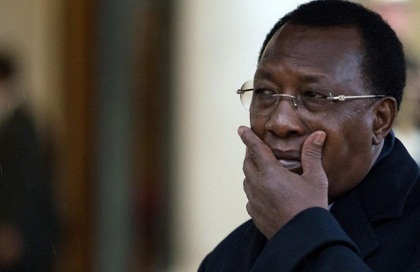 Chad's opposition successfully locked down the capital and other cities Wednesday, closing markets, shops and slowing traffic in a countrywide protest at President Idriss Deby Itno's bid for a fresh fifth term in office.

The protest emptied N'Djamena's two big markets of shoppers and school classrooms remained empty following the call for a nationwide shutdown under the slogan "That's Enough".

Banks and private companies remained open for business along with some ministries, but there was far less traffic than usual in the city.

Deby, who has been in office for 25 years, is running for re-election on April 10.

The morning to lunchtime shutdown "was total" in Chad's second biggest city Moundou, a resident told AFP by telephone. "Not even the motorbike taxis are running," he said.

In Mao in the northwest trade at the weekly market too was disrupted, a resident said.

The spokesman for the "That's Enough" opposition grouping, Mahamat Nour Ibedou, said the cities of Sarh in the south, Abeche in the east and central Mongo were also locked down.

"This shows people have realized they can exercise their democratic rights," said the spokesman for the score of civil society groups involved, including the Chadian Human Rights League and the Union of Chadian Trade Unions.

"It also highlights that people are fed up, it's proof they reject Deby's candidacy" for president," he added.

The nation is facing a wave of unrest, with students boycotting class and taking to the streets in recent days in protest over a girl's brutal rape.

A Chadian student was shot dead and five others wounded Monday when soldiers broke up a protest as demonstrations showed no sign of abating ahead of April's presidential vote.

The death was the second in a week of protests by students enraged over the gang rape of a girl named Zouhoura, which has been blamed on the sons of senior officials.

The girl was allegedly kidnapped and gang-raped by five young men who then posted a video online showing the victim naked and in tears. The video has since been taken down.

The footage sparked widespread public anger, with police arresting five suspected rapists -- three of them the sons of generals -- and four alleged accomplices, including a son of Foreign Minister Moussa Faki Mahamat.

Zouhoura's father, who filed a complaint over the attack, is a candidate in the April 10 elections.

Last week the Chadian government slapped a ban on unauthorized demonstrations with the minister for security and immigration accusing students of "sowing disorder" and saying they were "being manipulated by politicking groups."

Clamping down on dissident voices, Deby's regime has blocked access to Facebook and other social media networks used by protesters.