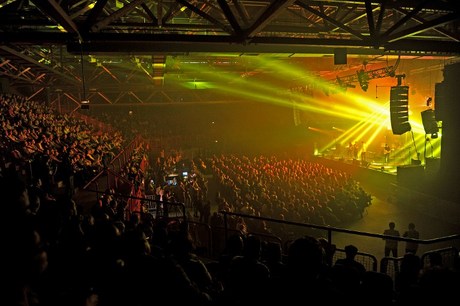 A popular Lebanese rock band says Jordanian authorities have banned them from performing because their songs promote religious and sexual freedom.

Jordan's Antiquities Department initially told Mashrou' Leila ("Night Project") it could not perform at a Roman Theater in the capital Amman because the show contradicts the venue's "authenticity."

However, Amman governor Khalid Abu Zeid told The Associated Press on Wednesday that the group was banned because its songs "contradict" religious beliefs.

"The written justification officially provided is that the performance would have been at odds with what the ministry of tourism viewed as the 'authenticity' of the site," the band said on its Facebook site.

It said the group, whose singer Hamed Sinno is openly homosexual, a criminal offense in Arab countries, had been "unofficially informed that we will never be allowed to play again anywhere in Jordan due to our political and religious beliefs and endorsement of gender equality and sexual freedom".

The band, which has toured several countries, performed in Dubai, and has gigs lined up in North America, condemned what it called Jordan's "censorship" and stressed that it had played the very same Amman venue three times in the past.

For lawmaker Bassam al-Battush, however, the musicians were trying to propagate "ideas which are foreign to our society and our Arab-Muslim culture" with their lyrics about sex, homosexuality, Satanism and "revolts against governments and societies".

The six-member band says on its Facebook page that "with their distinct approach to storytelling and orchestration, they have crafted some of the most melancholic ballads and raucous anthems in contemporary alternative Arabic music".

The decision could prove embarrassing for Western ally Jordan. The kingdom portrays itself as an island of tolerance in a region where fundamentalist Islam is on the rise.

The band has performed three times before at the Roman Theater.

Guitarist Firas Abou Fakher says the group has become "large enough" to make it a target for political attacks.

nonabel is hosting Mrs.Cyber Bully for a romantic afternoon :)
Will join us later!