Rifi Extends his Hand to Hariri: We Reject Control of Syrian Regime Allies of Tripoli Municipality 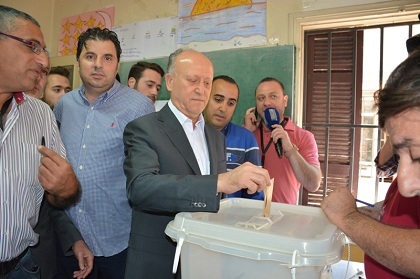 Resigned Justice Minister Ashraf Rifi stressed on Monday that his “hand is extended to all sides” in wake of his list's victory in the municipal polls in the northern city of Tripoli, reiterating his commitment to the values of the March 14 coalition.

He said during a press conference: “We voiced our rejection of the control of one political party of Tripoli and the control of the Syrian regime allies of the city's municipality.”

Two other lists were also running, but the main competition was limited to the Rifi- and Hariri-backed lists.

“Change is coming. They wanted a Tripoli that would serve their interests and they sought a hybrid alliance that undermines the city,” continued Rifi in wake of his victory.

“I did not seek to achieve personal gain, but that the municipal list I was backing would be responsible enough to cater to Tripoli. It will remain a city of coexistence and we will preserve this heritage.”

“We present this victory to slain former Prime Minister Rafik Hariri and the martyrs of the Cedar Revolution. We vow to continue along their path until we reach justice. We gift this victory to all those who seek sovereignty and we urge them to return to the values of March 14, 2005,” Rifi added.

“My hand is extended to all the citizens who seek the rise of the state and others should cease taking decisions that contradict the path that leads to independence,” he demanded.

On whether he would extend his hand to Hizbullah, he replied: “I had initially joined the cabinet among Hizbullah members.”

“It has however formed an illegal statelet and it has imposed a status quo in Lebanon, which we reject.”

“We will not allow Lebanon to be transformed into an Iranian province. I am ready to hold talks with Hizbullah to resolve issues peacefully.”

In addition, Rifi remarked that he extends his hand to MP Saad Hariri, adding that the rift with him emerged when he nominated Marada Movement chief MP Suleiman Franjieh as president.

Earlier, the resigned minister told Voice of Lebanon radio (100.5): “I have no problem holding direct or indirect talks with the Mustaqbal Movement.”

“I urge Hariri to return to the principles of his father Rafik Hariri,” he added.

The rift with the MP with Hariri's openness to figures loyal to the Syrian regime and Rifi's refusal to “subject the cabinet to Hizbullah's will.”

The minister resigned earlier this year in protest against “the power Hizbullah wields over the cabinet”. Hariri refused to back his resignation.

“I was never a member of the Mustaqbal Movement, but I followed the Hariri mentality,” Rifi told VDL on Monday in reference to Rafik Hariri.

Asked if the municipal polls will reflect on the presidential ones, he replied: “Tripoli had long stated that it opposes Franjieh's nomination.”

“I will not go back on my resignation until a new president is elected.”

The fourth and final round of the municipal elections were held in the North and Akkar on Sunday.

All the respect Mr. Ashraf Rifi

This is Ashraf el nass. All the respect to you Mr. Rifi, I hope that you stay safe, Lebanon needs real men like you.

You have my vote mr. rifi. The wind of change is upon us.

Hariri legitimized hezbollah's crimes against the Lebanese and other Arabs specifically in Syria, Iraq and Yemen. Rift's landslide victory came to delegitimize them.

The Salafists have spoken. He is Nusra's number 1.

he sure looks like one.... the photo speaks volumes let alone the article:

"We will not allow Lebanon to be transformed into an Iranian province." So let's be a Saudi province instead, great.

thank your lucky stars the majority did not vote