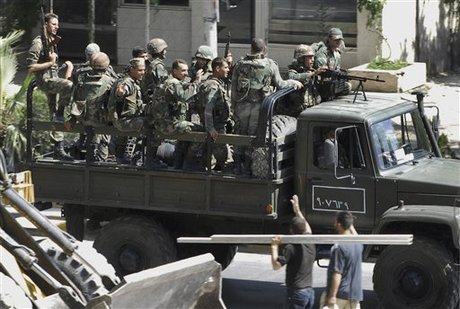 Eighteen members of Syria's security forces and two deserters were killed in clashes on Thursday in the flashpoint province of Homs, where at least 29 civilians also died, activists said.

"Eleven soldiers and members of the security forces were killed in skirmishes" with deserters in the town of Huleh, the Syrian Observatory for Human Rights said.

The rights group said security forces killed at least 12 civilians around the province in central Syria, including three in the Bayyada area of the city of Homs, while the Local Coordination Committees, a key activist group, said 29 civilians were killed Thursday in Homs.

The city of Rastan, also in Homs, was blasted with heavy machinegun fire after clashes between soldiers and deserters, two of whom were killed and 13 wounded, according to the Britain-based rights group.

Meanwhile, seven military pilots were killed when gunmen attacked their bus in the center of the country, opposition sources told Agence France Presse.

The attack, carried out by "armed Bedouins", took place near the city of Palmyra, said an opposition member based in Homs, and was claimed by the rebel Free Syrian Army.

In a statement the FSA said "a brigade carried out the attack on a bus transporting pilots on the road between Palmyra and Homs, killing seven officers and the driver."

The FSA, whose leadership is based in neighboring Turkey, has claimed several attacks in recent weeks against the Syrian military and pro-regime militias.

According to FSA chief Riyadh al-Asaad, the rebel force now has 20,000 men in its ranks, which it says are swelling each day.

On Tuesday, six children and five mutinous soldiers were among 34 people killed across Syria, the Syrian Observatory said.

The United Nations says the conflict in Syria has claimed more than 3,500 lives, mostly civilians, since it broke out in mid-March.

i'm writing you this because i'm sorry to see your incompetent troops deal with a bunch of foreign terrorists. We in lebanon dealt with those in a 2 hours on may 7. that's called efficiency. that's what you need to fight against terrorists and zionist militia. So please reform your army to be more efficient and deal with terrorists faster so that we can liberate our remaining lands together. After all, we all know you cannot liberate golan by yourself alone. we would be glad to help you, but you must deal with your domestic situation faster.

Are you sure it is 47 not 45 and not 52? Can you please double-check and get back to me? I have to present a report with the exact count by next Monday. Thanks.