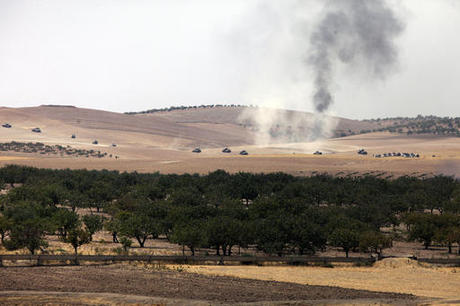 "We are deeply concerned at what is happening in the Syrian-Turkish border area," the ministry said in a statement.

The Turkish offensive targeting both Islamic State extremists and Syrian Kurdish militias could lead to deaths among peaceful civilians and "flare-ups of inter-ethnic tensions between Kurds and Arabs," it added.

Russia, a major ally of the Syrian regime, has strengthened its relationship with Syria's Kurds and a Kurdish representative office recently opened in Moscow.

Moscow, which began a bombing campaign in support of Assad in September last year, said it was "convinced that the Syrian conflict can be resolved exclusively on the firm basis of international law."

It called for "broad intra-Syrian dialogue with the participation of all the ethnic groups and confessions including Kurds."

Ankara has always called for the ouster of Assad as the key to ending the conflict, putting Turkey at odds with both Russia and Iran.