Over 140 Dead, 525 Hurt in Air Raid on Yemen Capital Funeral 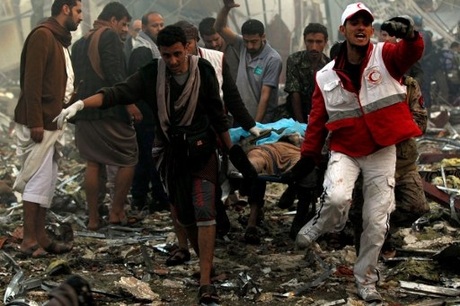 More than 140 people were killed and more than 525 wounded Saturday when air strikes hit a funeral ceremony in Yemen, a United Nations official said, with Huthi rebels blaming the attack on the Saudi-led coalition.

The coalition, which has come under increasing international scrutiny over alleged civilian deaths, denied any responsibility for the attack.

"The toll is very high: more than 520 wounded and more than 100 martyrs," the spokesman of the health ministry in Sanaa, Tamim al-Shami, told rebel Almasirah television.

It was one of the deadliest attacks since the coalition launched a bombing campaign against the Shiite Huthis in March 2015.

Riyadh's key ally Washington promptly warned it had launched an "immediate review" of support to the Saudi-led coalition, and that its security cooperation with Saudi Arabia was "not a blank check."

The U.N. humanitarian coordinator in Yemen, Jamie McGoldrick, said aid workers were "shocked and outraged" by the attacks that hit a community hall in the capital Sanaa where mourners had gathered.

He called for an immediate investigation and said the international community must exert pressure to ensure civilians are protected.

A "horrified and extremely disturbed" U.N. Under-Secretary-General for Humanitarian Affairs and Emergency Relief Coordinator Stephen O'Brien called for a prompt and "impartial" probe into the attacks.

"This horrendous and heinous attack displayed an utter disregard for human life."

In September 2015, a suspected coalition air strike killed at least 131 civilians at a wedding near the Red Sea city of Mokha. The Saudi-led alliance then also denied any involvement.

Some of the wounded had their legs torn off and were being treated on the spot by volunteers, he said.

In a statement to AFP, the Saudi-led coalition said it had no operations at the location and "other causes" for the incident must be considered.

"In light of this and other recent incidents, we have initiated an immediate review of our already significantly reduced support to the Saudi-led Coalition and are prepared to adjust our support so as to better align with U.S. principles, values and interests, including achieving an immediate and durable end to Yemen's tragic conflict."

Price stressed that "U.S. security cooperation with Saudi Arabia is not a blank check," and called on all sides to implement an "immediate" ceasefire.

The Iran-backed Huthis swept into Sanaa in September 2014 and advanced across much of Yemen, forcing the internationally recognized government of President Abedrabbo Mansour Hadi to flee.

More than 6,700 people -- most of them civilians -- have been killed in Yemen since the coalition intervened in support of Hadi, according to the United Nations.

Fighting has flared since U.N.-brokered peace talks between the government and insurgents collapsed in August.

People had come from all over Sanaa to attend the funeral, said Mulatif al-Mojani, who witnessed the latest air strikes.

"A plane fired a missile and minutes later another plane hit" the building where they had gathered, he told AFP.

Another witness, who declined to give his name, angrily described the attack as a "war crime."

Ambulance sirens blared as they transported the wounded away and residents said local hospitals had issued an appeal for blood donations.

The coalition has come under mounting international criticism in recent months over the civilian death toll in its aerial campaign.

A diplomatic source told AFP that intensified coalition bombing aims "to break" the rebels but warned that "this will not work."

A U.N. report in August said coalition air strikes are suspected of causing around half of all civilian deaths in Yemen.

It called for an independent international body to investigate an array of serious violations by all sides, after 4,000 civilians have been killed.

European states led by the Netherlands were defeated last week in a push to establish that inquiry.

The coalition has told AFP it uses highly accurate laser- and GPS-guided weapons and verifies targets many times to avoid civilian casualties.

The so-called supreme political council set up by the Huthis and their allies -- supporters of ousted president Ali Abdullah Saleh -- vowed to "use all means to respond to this crime" and urged Yemenis to protest outside U.N. offices in Sanaa on Sunday.

In addition to the mounting death toll, Yemenis are facing twin health and hunger crises.

On Friday, it also reported cases of cholera in Sanaa and third city Taez.

Wow! Probe..thans to the U.N and U.S impartiality.

Over 140 kiled and 500 wounded with serious disability injuries.

Yemen versus Aleppo? What is the difference? Mostly fighters killed..even the number of infighting between rebels killed more than what the Syrian army and Russia killes in on day.

I am not to here to say which side kis better.. both are bad. But for od sake, stop the war altogether and in the killing in the name of god.

Where are the silent majority? Say no to governance in the name of god. Shiite or sunnite..enough! Keep religion restraint to home and family values. We don't need your teaching about politics.

"I am not to here to say which side is better.".... Yes you are! You are practicing Takiah like all of you iranian shias do.

1)There are more than 400,000 dead in Syria so far and it is laughable to say the majority were killed by rebels infighting.

2) "Keep religion restraint to home and family values. We don't need your teaching about politics."... What does the head of your so called islamic resistance wear? does he not claim to be a "religious" man yet in every speech he talks of politics internally and externally.

Today the saudis and their bloodthirsty lapdogs rejoice and will find all sorts of tricks to justify hundreds of civilian victims, showing once more, if there was still a need, that they are hypocrites and never cared about civilian victims, only US, israeli and saudi agendas.

I respect Mr. Mowaten because he is Lebanese and not Iranian first and foremost. I also respect him because he is impartial, transparent, and even handed when assessing political situations.

The coalition gains nothing and stands to lose a lot if they bomb a civilian gathering unlike your iranian terror militia in Yemen. The people of Sanaa were about to take to the streets to demonstrate against the houthi terrorists and then this happens. Coincidence huh?? LOL.

If anyone takes a look at the aftermath of the bombing, he would immediately gather it was not an airstrike but rather an inside job.

Had this happen in Syria, then the U.S would've rushed to cry for crimes against humanity.
All the humanitarian groups says SaveAleppo, what about saving Yemen?

No never, because Yemen are bombed by the same ones that funds the Human Rights Watch.

No white helmets here neither, only western funded "humanitarian groups" in Syria.

Every terrorist killed is a civilian according to the iranian terrorist militia. Keep up the pressure on these criminals and chase them out of Yemen and the entirety of the Arab world.

Every terrorist killed in Aleppo is a good thing.
All your Saudi kind.

In a statement to AFP, the Saudi-led coalition said it had no operations at the location and "other causes" for the incident must be considered.

but what is funny is that an "eyewitness" similar to mowaten said "A plane fired a missile and minutes later another plane hit" the building where they had gathered".

As if he could see the plane in the first place with the naked eye let alone see the missile being fired.

reap what you sow terrorists.

genocide by the wahhabi state... soon the revolt will step into the kingdom, thus the Saudi stooges in this forum will be called to join service to save the asses of their kings, but they won't be able, no @lubnani.masi7i!?