Al-Rahi: Arms Possession Must Be Limited to Legitimate Security Forces 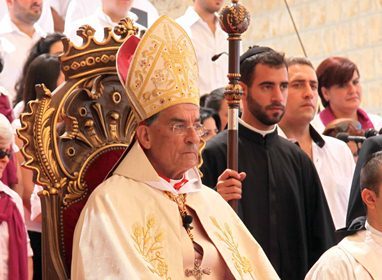 Maronite Patriarch Beshara al-Rahi called on officials on Sunday to assume their responsibilities in protecting the citizens’ security and that of the United Nations Interim Force in Lebanon.

He said during his Sunday sermon: “They should work seriously in limiting the possession of arms in Lebanon to the legitimate security forces and leave all defense and security decisions to the political authorities.”

“It is no longer acceptable for the country to remain hostage to any side and under any excuse,” he stressed.

“This cannot be achieved without guaranteeing trust between the officials,” the patriarch noted.

“They should all respect the other and accept their differences instead of issuing accusations of treason,” he added.

“They should advocate rhetoric that helps solve crises and not fuel tensions,” al-Rahi remarked.

Furthermore, he condemned Friday’s attack against UNIFIL, which he described as an attack against peace and the sacrifices made by the international troops.

It is also an attack against the dignity of France, Lebanon, and the participating nations, he stated.

another blow against CPL....

Every thing seems to be right on track

the syro/iranians block is coming down soon, and this is the last warning to hizbushaitan to surrender its weapons before the final blow.

galibaboon = "the americans use you and throw you"

it is about time you make a sensible cal Mr Patriach, because soon hassouni and his clan will be nuked for ever...be brave now

Nice that Patriarch Sfeir is talking to the young man. . . . And that apparently he is listening.

@Galiboun
you are the proud fruit of your secte, so probably you are one of their so called saints?
all of you thugs are either thieves or killers, and you are starting to really feel the heat about your fall pretty soon to react the way you do :)

“It is no longer acceptable for the country to remain hostage to any side and under any excuse,” he stressed.... The "sides" are Hizbollah, iran, Syria and its other local agents... "Al Moukawama" is the worst "excuse"...

Al Rahi had finally resorted to logic rather than rhetoric. Although belated, his mistakes since he took the helm while not condonable could be disregarded as he's come to his senses. It might be that his talks with Aoun had blared his vision resulting in the mistakes he made before.

the Christian community in Lebanon and the Arab world could only be acceptable if freedom is supported because only this would bring stability and peace to the Arab world. The world nowadays doesn't allow extremism to exist. And while Egypt is now struggling to find its way to democracy, ultimately it will succeed in estbalishing a form of government that meets the desires of the masses.

Religion is and should be used for the good of humanity not for injuring it through dictatorships and tyrants.

The best bets for Christians (if Christianity is really the way God had intended it to be) should be through dignified stances not transient gains which soon evaporate leaving its evil ramnants.

@Galiboun I have serious reserve about your nationality. I highly doubt you are Lebanese. Probably working for some foreign agency and collecting stats as it reflects the Lebanese political opinions. Mabarak? Bloke ???