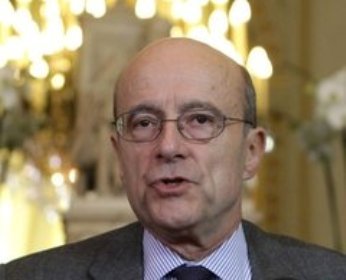 However, the top French diplomat noted that he had no evidence to substantiate his claim.

Asked during an interview with TV5MONDE, Radio France Internationale and Le Monde whether he believed the attack was a “message” from Syria, Juppe said: “There’s no doubt.”

"We have strong reasons to think that this attack came from there," he said, noting that Damascus used Hizbullah for such attacks in the past.

"I don't have proof," he stressed, while adding that the group was Syria's "armed wing."

Juppe added: "We have again asked the Lebanese government to protect UNIFIL."

The minister on Friday condemned the attack in which five French troops were wounded, saying France would not be intimidated by such "vile acts."

"I condemn in the strongest terms the cowardly attack that was carried out against UNIFIL (U.N. Interim Force in Lebanon) this morning, wounding five French peacekeepers," Juppe said on Friday.

A roadside bomb in the southern coastal town of Tyre wounded five French soldiers and two civilians when it was detonated as their vehicle drove past.

The chief of staff in Paris said four peacekeepers were "very lightly wounded" and the fifth "a bit more seriously" but without life-threatening injuries.

France is "determined to continue its involvement with UNIFIL (and) will not be intimidated by such vile acts," Juppe said.

UNIFIL patrols have been the target of a string of unclaimed roadside bomb attacks in recent years, including two previously in 2011.

Friday's blast came amid heightened tension over the bloody uprising in neighboring Syria, with some warning the unrest could spill over into Lebanon.

There have been constant fears that the UNIFIL force stationed in the south of the country would be an easy target should the unrest reach Lebanon.

Spain currently commands the 12,100-strong UNIFIL force, which was founded in 1978 and expanded after a 2006 war between Israel and Hizbullah.

France has one of the largest contingents with 1,300 soldiers.

In July, six French UNIFIL troops were wounded, one of them seriously, in the southern coastal town of Sidon, in an attack similar to Friday's. In May, six Italian peacekeepers were wounded in Sidon, also in a roadside bombing.

Three Spanish and three Colombian peacekeepers were killed in June 2007 when a booby-trapped car exploded as their patrol vehicle drove by.

and guess who executed it :) some saints :)

If you have no proof don.t accuse anybody
but that is nothing new in Mideast politics
you throw mud to the wall hoping one of them to stick on the wall

I guess my comments offended the editor or his or her superiors, thats why didn't print my comments

Free the Syrian people so that the Lebanese enjoy their freedom as well. We'll need another pre-1942 occupation.

This attack on the UNIFIL is not going to have a big impact on the situation in Syria which is getting bloodier everyday. The Syrian regime will be toppled by the Syrian people sooner rather than later. Unfortunately, though, this will happen after many more innocent people die. The Arab league has proven to be ineffective in dealing with this crisis because of its limited abilities and its lack of unison in opinion amongst its members.

I guess Huzbullah is sensing that its end is near and is therefore trying all menas it has at the present time to vent its frustration through UNIFIL attacks which are turning the Lebanese ppeople against against it.

The torrential anger in Syria is bound to engulf all those who are supportive of the regime over there.

But with the relustance of both the Arab league and the international community, I am afraid that the regime in Syria might have a chance of perpetuating itself after killing the majority of the Syrian opposing it.

He is "undoubtedly" as sure about it as when he and his Chirac were about Syria assassinating the barkeel, only to find out that "undoubtedly" it was the four innocent generals in collaboration with Imad Mamal, Oum Kalthoum and Farid al Atrache, which "undoubtedly" led to the real killers from Hizbullah who will "undoubtedly" lead to Michel Aoun, Suleiman Franjieh and Talal Erslan, the real plotters. "Undoubtedly" Juppe knows and his chief of intelligence Jacques Clouseau confirmed it.

Naharnet cannot stand the truth. You must be M14 or else. They talk about Bashar and they are just like him. Go ahead cancel my account too bozos.

Bashar is no good; But so is becoming allies with foreigners in order to destroy your countrymen in the south. So if you must oppose Syria even though they left then fine but do not help in the killings of other Lebanese. Killing is not only 1-way and direct as the assasinations; But also inclusive of political ties and activities that serves your brethern's enemies. So just as you accuse the others of assasinations, you also are guilty of involving foreigners and asking for the aid to get rid of other Lebanese.

some of you don t blame the hezb who says that israel is undoubtedly behind hariri s murder... funny isn t it?