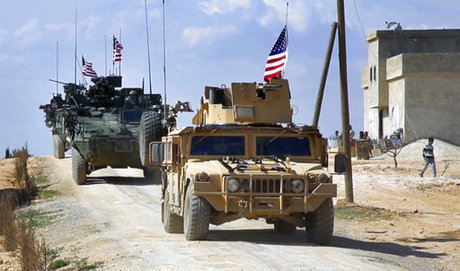 The Syrian government's allies will strike at American positions inside Syria if the U.S. crosses any "red lines," a Hizbullah-affiliated media arm warned on Wednesday.

The Pentagon said Tuesday the pro-government forces were infringing on a "de-confliction" zone established to protect U.S.-backed local opposition forces, who are engaged in fighting the Islamic State group.

Hizbullah's TV station al-Manar broadcast footage it said was of an Iranian drone tailing an American one over eastern Syria. It said the video was proof the Syrian government's backers could strike American units at will.

Iran is a key backer of Hizbullah and the Syrian government, and is deeply involved in the Syrian civil war.

Please, don't let your 'self-restraint' prevent you from doing your jihadist duty. Let loose and go for it and let us watch how you are going to get bombed into oblivion.

so why threaten if all you can answer with is "probably because" ;)

Once bitten, twice shy. Nasrallah has miscalculated before, and saved his face by calling it a devine victory. Do you really think he is prepared to repeat the mistake? He has learned from North Koreas Kim Young-un to bark loud, though....

Rather your hero Trump that barks, first he said attacking Iran and North Korea was on the table, nothing happend.

US is like Israel, they only strike when they feel safe from a distance.
The Resistance can easily hit American targets, both in Syria and Iraq too.

Big talk from a takia fake. You sure you don't work for CNN? Definitely you sound like their reporters, basically whiny kids.

you try, just try mystic; my daddy will discipline you very soon

the iranian terrorists are hurting and that is good.

the resistance can defeat amreeka hands down because shia are not afraid to die. In fact, they love to die.

and to you, your family, children and your loved ones.

Pfft. Talk talk talk. Here's what happens should they raise their voices: http://www.bbc.com/news/world-middle-east-40206957