Geagea: Hizbullah is Directly or Indirectly Responsible for All Security Incidents in South 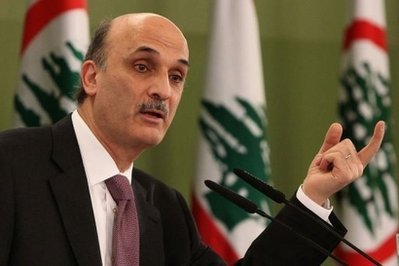 Lebanese Forces leader Samir Geagea stated on Tuesday that the United Nations Interim Force in Lebanon’s mission in the South has been curtailed due to Hizbullah’s presence in the area.

He said during a press conference on the latest developments: “Hizbullah is directly or indirectly responsible for all the security incidents in southern Lebanon.”

He explained that ever since UNIFIL assumed its duties in the South, it has come under attack by the local residents under the excuse of maintaining national dignity.

“Hundreds and even thousands of attacks” by the residents against UNIFIL have taken place and as a result, the international troops have been forced to resign their mission and “remain cooped up in their barracks,” he continued.

“Had they been given the opportunity to exercise their duties, would they have been successful in maintaining the stability in the South?” asked the LF chief.

“The forces in the area have however prevented them from fulfilling their mission and instead remain concerned about their own safety,” Geagea noted.

“UNIFIL and the Lebanese authorities have only been allowed to inspect explosion sites in the South after Hizbullah had swept the area, which confirms the party’s control of the region,” he said.

“Is it therefore logical that Hizbullah does not know who has been behind attacks against UNIFIL?” he wondered.

The party is responsible for the attacks because it is definitely aware of the presence of various armed groups in the South, he asserted.

Furthermore, Geagea accused Syria of supporting these groups and employing them to divert blame for attacks away from Hizbullah.

“Stability in Lebanon can therefore only be established through eliminating all armed groups outside the state’s control and getting rid of the magical equation of the army, people, and Resistance,” he stressed.

“The equation should instead be replaced with that of the people, state, and army,” he stated.

He indirectly blamed state officials for the current instability, saying that they should assume their responsibilities in maintaining the peace instead of simply condemning various security incidents.

In addition, Geagea warned that the various attacks against UNIFIL may force the participating countries to withdraw their troops.

France on Sunday accused Syria and its ally Hizbullah of being behind Friday’s attack.

"We have strong reasons to think that this attack came from Syria," said French Foreign Minister Alain Juppe, noting that Damascus used Hizbullah for such attacks in the past.

On Monday, Syria and Hizbullah both denied the allegations.

"Syria has no link whatsoever with this act which we condemn," Syrian foreign ministry spokesman Jihad Maqdisi said in a statement

For its part, the party stressed in a statement: “Hizbullah deplores this condemned behavior, which was inappropriate coming from the foreign minister of an important nation such as France.”

Hezbollah is the problem, the sooner the Lebanese realize this fact, the better Lebanon's chances of becoming a true nation would be.

As someone wrote yesterday, for Hezbollah to deny that it had anything to do with armed attacks in the south on UNIFIL is about as ridiculous as Assad saying that he has no control over the Syrian Army (that is commanded by his brother Maher).
The same childish response, when the international community catches these guys in the act, they always deny responsibility even when the event happens in their own back yards using their exclusively owned little toys.

Geagea has called them out...again. If the rule of law animated the international community, this situation in Syria and in Lebanon with Assad and Hezbollah would have been enjoined years ago. But we must wait until the economic interests of the players is adversely effected enough so that they will take action, justified, of course by the need to enforce the rule of law.

Regardless of his past (which is something he share with almost all lebanese leaders) I cannot but agree with Geagea here. In fact he is spot on, operations like that cannot be done unnoticed by the Hizbollah security apparatus even though they are probably not directly involved. Lebanon has got itself a state within the state like it has had since the early 1970s. First PLO, then IDF and now Hezbollah. The first two were easier to get rid of since they were by and large foreigners. The current force needs to be undone by a variety of means. Diplomatic, psychological (get the shia to realize that we want to build a peaceful Lebanon with them as an intregal part) and in worst case military.

the importance of what geagea is saying lies in what he is not saying, i.e. hizbushaitan wil be responsible for the destruction of lebanon in the upcoming war.

Geagea is the best politician in Lebanon for speaking the clear truth. The Hezz is responsible for all security incidents in the south, yet they always claim innocence.

Hakeem is correct; Hizb is the strongest military force on the ground in the South and has a massive spying network. NOTHING happens without the Hizbes knowing about it...so yes Mr. Geagea is correct.

Mowaten- It's blatantly obvious that you have a job to do and that is damage control for your cronies. You are relentless in countering every negative comment made about your precious Hizb and Amal. Do yourself a favor and go tell your employers that the only thing this does is show how desperate they are. Anyway good luck with your campaign as the inevitable is happening right before your eyes and not amount of damage control is going to help. Good luck in the next few years to you and your M8 friends.

@mowaten
your comments are a bit funny!
why do you defend these nazis?

Mr Geagea.... Why he doesn't want to repent?
U still have a chance...
MrBrain

Dear Samir ,
The path to salvation is open for people who are able to open their heart and mind again...
Repent and we will forgive you
MrBrain

@MrBrain: Although he lead a militia once, at least his militia submitted all their arms to the national army and they live under the state control despite the fact that they could have created their own state 10 yrs ago. So if you get your brain to repent and wake up a little bit then you would realize that there is one and only one group who will not and refuse to live in Lebanon without foreign money and arms. Hizbollah under the song resistance