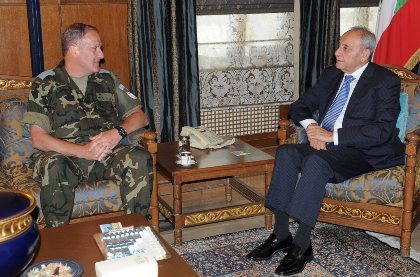 Speaker Nabih Berri stressed on Tuesday the importance of cooperation between the people, army, and resistance, as well as the United Nations Interim Force in Lebanon, in defending the security of southern Lebanon.

He said after holding talks with UNIFIL Commander Major General Alberto Asarta: “The attacks that have taken place in the South target the equation of the army, people, and resistance.”

He added that the Lebanese officials’ condemnation of the attacks are not enough in tackling the instability, but the cooperation of the people, army, and resistance is necessary to maintain the peace.

The speaker later held talks with the British Ambassador to Lebanon Tom Fletcher on the latest developments.

On Friday, five French soldiers and two civilians were wounded by a powerful roadside bomb that targeted a UNIFIL patrol in the southern coastal city of Tyre.

Earlier this year, a French U.N. patrol was attacked on July 26 and Italian peacekeepers were targeted on May 27.

In late November, a rocket was fired from southern Lebanon into northern Israel, prompting the Jewish state’s army to warn Beirut to work to prevent similar attacks in the future.

that equation exists only in your heads :) the people of the south do not want your guns and the war that will destroy their homes.

and the Zahrani power station attack targets people, army equation by the Resistance.

Mr. Berri your equation no longer adds up.
Come up with another one ( preferably more patriotic) or better yet go back to school.

There was never an equation.
Even Berri resents this so called equation and is waiting for the right moment to retake the leadership of the Shias that hezbollah forced out of his hands.