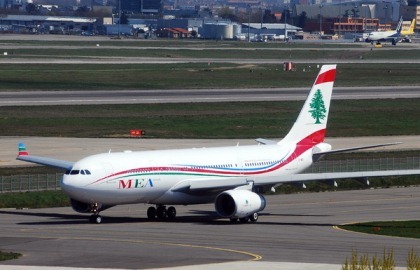 Lebanon's and Egypt's national carriers will halt flights to the Iraqi Kurdish regional capital Arbil this week at the request of the Baghdad authorities, they said on Wednesday.

Their decision comes after Iraq's government threatened to ban international flights to and from Iraqi Kurdistan after the region held an independence referendum on Monday.

Lebanon's Middle East Airlines and EgyptAir both said their flights to and from Arbil would be affected.

MEA chairman Mohammed al-Hout confirmed "the suspension of all flights to and from Arbil from Friday, upon the request of the Iraqi aviation authorities for the halt of all international fights to and from the airport."

In a statement, EgyptAir also said its flights would halt from Friday "until further notice."

The move comes a day after Iraqi Prime Minister Haider Abadi threatened to order a halt to all flights serving airports in Iraqi Kurdistan in response to the independence vote, which is expected to produce a resounding "yes."

Abadi said he would ban "international flights to and from Kurdistan" from Friday unless the airports in Arbil and the city of Sulaimaniyah were placed under the control of the federal government in Baghdad.

The transport minister of the Kurdistan Regional Government, Mawloud Bawah Murad, expressed bafflement at the move by Baghdad.

"Arbil and Sulaimaniyah airports were built from the budget of the Kurdistan government," he told a press conference in Arbil.

"We will not leave any Lebanese stranded. They will be able to go to Baghdad, Basra or Najaf as transit points," he said.

Baghdad has reacted with anger to Monday's Kurdish independence vote, saying there would be no negotiations on wider autonomy for the Kurds in its wake.

Abadi demanded on Wednesday that the vote be annulled.

Disgusting action. MEA should be ashamed of themselves.