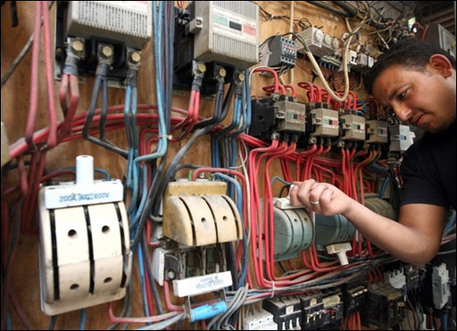 Lebanon’s failure to find a solution for its chronic electricity crisis was attributed to “pressures exerted by owners of generators who control 50 percent of the Lebanese market and represent a pressure group within the parliament,” the pan-Arab al-Hayat reported on Friday.

French sources following up closely on the international CEDRE conference held in Paris two weeks ago, which secured billions for Lebanon’s infrastructure, asked about the reasons behind all failed projects that aimed to reform Lebanon’s electricity sector and improve the bill collection system.

The sources, who spoke on condition of anonymity, told the daily that the answer lies in “threats of owners of generators who control 50 percent of the Lebanese market and represent a pressure group within the parliament.”

They added that “investors at CEDRE insist on the need for electricity sector reform in order to reduce public expenses and public deficit, and also because the reforms will not be negative for the consumer, but will be negative for the of owners of generators.”

On the electricity plan to lease power generating vessels, they considered it an “expensive and short-term solution,” and Paris has alerted Lebanese officials of corruption because the plan was based on a “single offer.”

They warned that imposition of such a plan could trigger a “political crisis,” due to the fact that it raised a lot of criticism and fears of corruption.

“Paris can provide the Lebanese authorities with a permanent solution that will increase the production of electricity within 10 months via two power plants, and at a lower cost than the barges. Paris has not yet raised the issue because the Free Patriotic Movement is still committed to the power barges plan. But Paris considers the ships plan as no longer viable politically, as it raised controversy and doubts,” concluded the sources.

Agree privatization is only way out. Also privatize Telecomm sector. That's 2 ministries eliminated which will save the state billions. Next merge Social services with health Ministry. Then eliminate Information Ministry (only despotic regimes still have such Ministries) and Sports Ministry, or merge with Culture Ministry and finally just shut down the Ministry of displaced.